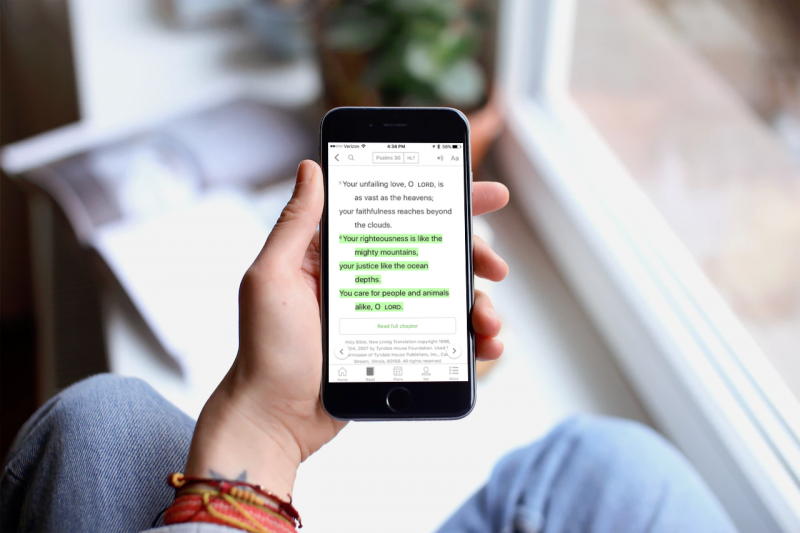 In 2017, more people than ever read, listened to, reflected on and shared God’s Word, according to the popular Bible app YouVersion. But what has been the most popular Bible passage this year?

The Bible verse that was shared, bookmarked, and highlighted the most often by the worldwide Bible app community in 2017 is Joshua 1: 9, which reads, “This is my commandment: be strong and courageous! Don’t be afraid or be discouraged. For the Lord your God is with you wherever you go. “

However, the report says that in the United States, the most popular verse this year was Romans 8:28: “And we know that in all things God works for the good of those who love him, who have been called according to his purpose.

Created in 2008 as one of 200 apps available in the iPhone app store, the YouVersion Bible App has now reached the 295 million download mark.

“We believe the Bible is a lasting source of courage and strength,” YouVersion founder and Life.Church pastor Bobby Gruenewald said in a statement to Faithwire. “We are encouraged to see from this year’s data that people around the world are finding hope in the Word of God.”

He added, “In recent years, technology has made the translation of the Bible faster than ever before. There is incredible momentum around this effort which we know will not stop until each person has the scriptures available in the language of their heart.

One user of the app, identified as Vinod P. from the state of Bihar in India, reportedly said, “The availability of different versions has deepened my Bible study, and I have now read the entire Bible several times. I plan to read the entire Bible. Bible is one of the most important accomplishments of my life. The Bible App made it possible. “

However, more than a billion people still do not have the Bibles in their language, according to YouVersion, which says it is working to have the New Testament translated for 99.9% of the world’s population by 2033. .

“Through this partnership with The Octagon Project, the YouVersion community can experience the same steps Jesus took in Jerusalem,” said Bobby Gruenewald, pastor of Life.Church Innovation and founder of the YouVersion Bible app at the time. “We are excited to take advantage of technologies such as virtual reality to help people become more immersed in the scriptures.”

Last year, Gruenewald told the Christian Post that he “could never have imagined how many people would come to trust it every day, all over the world.”

“God has done much more through the Bible App than we could have asked for or imagined, especially in bringing together a diverse group of people and organizations to rally around a common mission,” he said. declared. “Translators, editors, Bible societies, churches, authors and hundreds of volunteers came together in a massive coalition with one goal: to help people become fully engaged in the Bible.

“Do not be discouraged”: the biblical application YouVersion exceeds 300 million …… | News and reports