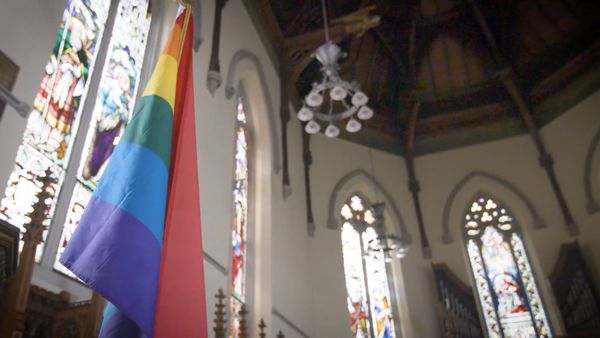 “There is neither Jew nor Gentile, slave nor free, male or female, for you are all one in Christ Jesus”, says the Bible (Galatians 3:28) – and yet if one reads More contemporary sources, such as the popular press, see Christianity framed in opposition to all sorts of life experiences, including being LGBT. It’s a difficult situation because as people grow up and come to terms with a minority sexual orientation or gender experience, the religious belief doesn’t just go away. Almost a fifth of LGBTQ+ people in the UK are Christian, and worldwide the proportion is much higher. How do these people deal with perceived conflicts within their own identities and find a home within the Church?

Focusing on LGBTQ+ people of color in Jamaica and the United States, With Wonder sets out to answer these questions, finding a diverse set of stories that contain their share of tragedy and suffering, but are ultimately carried by hope. Its participants not only retained their faith, but each of them found a way to reach out and influence the world. The joy they find in their faith and in helping others permeates the film. There’s nothing pushy about it – it’s just as engaging if you have a different religious belief, or none – but naturally the film was made with a specific audience in mind: those whose the members rarely see each other on the big screen.

Reverend Jide, who works at Jamaica’s House of Rainbow to provide community and a place of safety for other LGBTQ+ Christians, talks about growing up as the son of a Nigerian immigrant in the United States and coming up against his father as they both sought to live a moral life. For him, becoming a minister began with a need for honesty about all aspects of who he was; Coming out of the closet brought him closer to God. It’s a story echoed by Winnie, who speaks of the freedom she felt in acknowledging herself as a lesbian, and clearly feels that it has enlightened her ministry. For her, self-acceptance is an integral part of the process of accepting God’s love.

There are others. Phyll is a black British woman doing support work in Jamaica. She acknowledges that it’s different for her and doesn’t want to decenter the lives of the people she works with, but what she has to say about her experiences still informs the film. Jessicka and Tanya, a local lesbian couple, are less forthcoming, but the love they’ve found in each other and in their community shines through the screen. Maurice, a local gay man, has an encyclopedic knowledge of LGBTQ+ issues in the island nation and could easily direct a documentary himself, but director Sharon Lewis is careful to balance those varied stories. What stands out perhaps most strongly in Maurice’s story is the understanding he managed to reach with his parents.

Not everyone was so lucky. The pastor’s daughter, Serena, says she grew up under this particular pressure often experienced by young members of minority communities, supposed to be a good representative of all Chinese Americans. That didn’t leave much room for her to come out as a lesbian, and while she still held out hope for a reconciliation, she struggled as a result. For D’Lo, a trans man who is part of the Tamil diaspora in the United States, the situation is even more difficult. There is an angry aspect to his stage performances, and his withholding of his faith comes across as an act of resistance, a refusal to let that too be taken from him, even as he speaks of Jesus as the friend who accompanied when no one else was there.

Structurally, Lewis keeps it simple. His subjects speak to the camera in places that have been significant to their travels. Many of them know each other – they are small communities – and sometimes you see them working together. It reminds us of the importance of faith as a means of bringing people together. No LGBTQ+ Christian viewer will leave this film feeling alone in the world.

Hall of Men in Kansas mixes books, beer and prayer