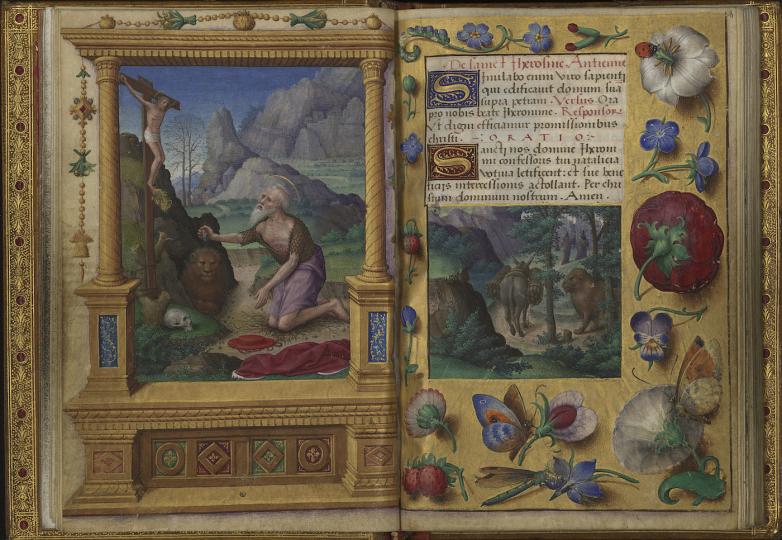 Tudor books from Henry VII to Elizabeth I

Last week, the Metropolitan Museum of Art in New York opened a sensational new exhibition, The Tudors: Art and Majesty in Renaissance England. Spanning from the seizure of the throne by King Henry VII in 1485 to the death of his granddaughter Queen Elizabeth I in 1603, the Tudor era was certainly dramatic, if not treacherous, and it was also a time when arts flourished. In this exhibition, more than 100 items bring it all to light through vibrant portraits, tapestries, carvings, armor and, of course, Tudor books and manuscripts.

Books and manuscripts on display include:

The Book of Hours of Mary of England, Queen of France (photo above), tempera on vellum ca. 1495-1500 with miniature attributed to the Master of Claude de France, ca. 1514. This book was given by King Louis XII to his wife, Marie, sister of Henry VIII. She then introduced him to Henry.

Two editions of Astronomicum Caesarea, an astrological text used by royalty to chart the stars for making critical decisions, printed in 1540 by Georg and Petrus Apianus with hand-colored woodcuts by Michael Ostendorfer. According to the Met, “Henry VIII, who had the best contemporary books on the market, probably kept his copy alongside other astronomical books in the Secret Jewel House in the Tower of London.” Watch this book “in motion” here.

NOTHING IS IMPOSSIBLE – Movieguide