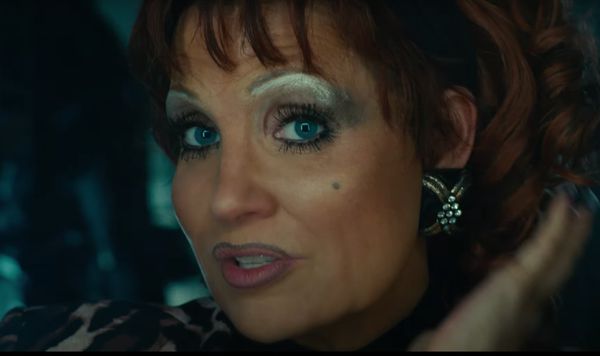 The fake and the genuine collide in fascinating ways in Michael Showalter’s prolific biopic about televangelists Tammy Faye and Jim Bakker, a longtime passion project for star Jessica Chastain and based on the cult documentary of the same name. In fact, the real and the acted are so close that by the end of the film, it’s not entirely clear if even Tammy knows where one ends and the other begins.

The Showalter film, scripted by Abe Sylvia, follows Tammy and Jim from their first meeting in Bible college, where there is already a larger-than-life quality to Jim (Andrew Garfield, lying on charm and smarm) than the eyes wide-eyed and, the film suggests, naive “true believer” Tammy (Chastain) finds irresistible. Shot in a deliberately kitschy fashion – which reminded me of the over-the-top vibe of Steven Soderbergh’s Liberace Behind The Candelabra biopic – the film portrays the pair as both spontaneous and, at least in Jim’s case, calculating as they go. as she ascends and rises, while collecting money from congregations trying to shore up a treasure in heaven. Starting out as a children’s show — on the grounds that where kids go, parents will follow — they were soon the main draw of the Praise the Lord network.

Whether there’s an air of faux in the costumes and makeup, but that’s surely part of the question, given that Tammy, in particular, has become a caricature of herself over the years, well that there are indications that she was at least as sin against as sinning in some areas. She was a natural performer, breaking into song at just about every opportunity, and the film raises questions, including whether she was playing innocence in the scandals that followed the couple or more complicit.

There is also a sadness involved in the fact that she could have been part of a fiction that she has not even done for a long time. Interestingly, and thanks to Chastain’s important but nuanced performance, we’re bound to have considerable sympathy for her, not least because she stood up against the prevailing winds of patriarchy when it came to gay rights. Just two months after Ronald Reagan first used the term AIDS, she interviewed gay pastor Steve Pieters who was living with HIV live, a move that put her in direct opposition to right-wing pastor Jerry Falwell (Vincent D’Onofrio), whose homophobic views were directly opposed to his.

Overall it’s a bit crippled by the structure of the biopic, meaning it almost inevitably skates over interesting side stories such as the connection between the evangelical movement and republicanism, but a fascinating watch nonetheless thanks to Chastain .