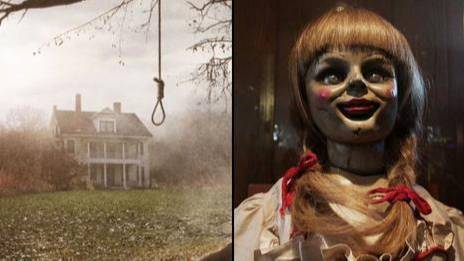 While you couldn’t pay most people enough money to spend a night in the haunted town Conspiracy house, someone paid well over a million pounds to own the damn thing. Check out the scary list below:

That being said, the new owner won’t even get the chance to check out the ghosts that haunt the property as she’s agreed to take the seller’s advice – not to live in the house for her own good.

Countless paranormal occurrences have been reported at the 1826 house over the years, with many believing it to be haunted by the spirit of Bathsheba Sherman, who lived there in the 19th century.

You might recognize the name because it’s the same name as the antagonist in James Wan’s 2013 horror movie, which was inspired by the hauntings of that same house.

Other names you might recognize in the film are Ed and Lorraine Warren, who were real life paranormal investigators and founders of New England’s oldest ghost hunting team.

Although it looks like pure nightmare fuel to most, when the two-story, fourteen-room farmhouse in Burrillville, Rhode Island went up for sale last year, it generated a lot of interest.

Property developer Jacqueline Nuñez, 58, beat competition from more than ten other bids on the property. And although she paid a heavy price, she agreed not to stay at home.

Speaking to The Wall Street Journal, she said: “This is a very personal purchase for me. When it came on the market I thought to myself, ‘This is a property that allows people to talk to the dead “.

That’s certainly a nice way to put it.

The sellers, Jenn and Cory Heinzen, were equally respectful – as paranormal investigators themselves, they told the publication they spent four months in a room in order to let the spirits ‘get used to us’. instead of bursting in”.

While there, they experienced some strange occurrences including a dark figure appearing at their bedroom door, Cory adding: “Once we realized we were both awake and saw it every two, he was gone.”

As for the new owner, Jacqueline said she plans to hold events there, telling the Journal, “I’m not afraid of the house…ask me again in a year.”

Seven recent books that probe history and challenge the present