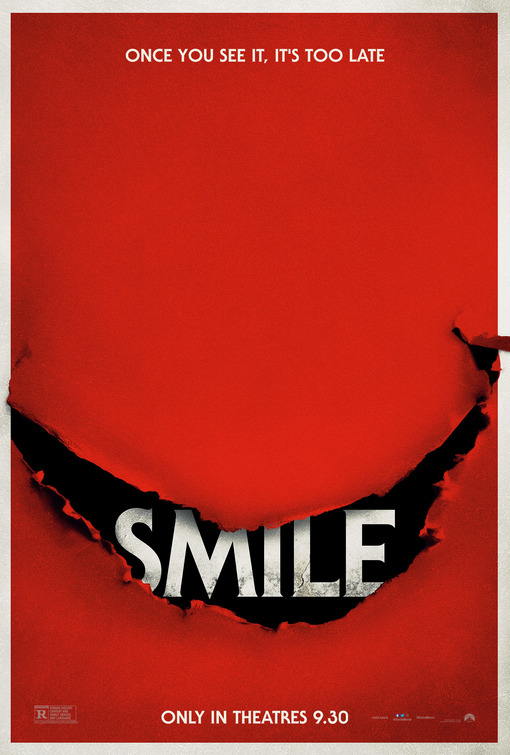 SMILE is another horror movie about a demonic spirit that haunts people. Dr. Rose Carter is a hospital psychiatrist. One day, a graduate student is admitted, says she is haunted by some kind of demonic spirit, and commits suicide in front of Rose’s eyes. Of course, now the demonic spirit begins to haunt Rose. She learns that the student recently witnessed the suicide of one of his college professors. Eventually, things go from bad to worse. Meanwhile, Rose enlists the help of her ex-fiancé, a cop, to trace the college professor’s recent history.

SMILE is good at scaring moviegoers, but its goals seem to be limited to that. Moreover, the film’s unsatisfactory ending offers no real relief to those scares and no victory over the demon. This is not surprising since Rose never turns to God or the Bible, let alone Jesus Christ or a Christian pastor, to defeat the demon. SMILE also has a lot of foul language and gruesome violence. MOVIEGUIDE® can’t think of a good reason for moviegoers to see this obnoxious and unsatisfying movie.

Completely occult worldview of a demon haunting and possessing people and causing a chain of suicides, with no Christian or biblical solutions offered to oppose or defeat the demon, and all solutions used by victims and potential victims are solutions vaguely occult or humanistic (including humanistic/secular psychiatric)

Some extreme, gruesome and strong violence includes possessed people deliberately slitting their throats or smashing their heads in front of people, a photo showing a man’s mouth shattered from his self-afflicted wound, a demon stalking a woman, many scary images of demons and involving a demon, a boy discovers the body of a dead cat in a birthday present which he deforms, a woman falls through a glass table and cuts both her arms

No sex scenes, but the wife lives with her new fiancé

No nudity but a woman appears in a black halter bra

Some alcohol consumption, including to calm the nerves

SMILE is another horror movie about a demonic spirit that haunts people, and this time it’s a female psychiatrist working in a hospital trying to treat a new patient, who horrifically commits suicide right in front of her. SMILE is effective in scaring moviegoers, but the unsatisfactory ending offers no real relief from those fears and no victory over the demon, and the film contains a lot of bad language and gruesome violence.

Dr. Rose Carter is a psychiatrist and works in a hospital. One day, a distraught grad student named Laura is admitted, and Rose begins talking with Laura to find out what’s bothering her. Laura says she is haunted by some kind of spirit that poses as friends, relatives, and strangers. People just give him a haunting, disturbing smile. When Rose confronts Laura about her crazy story, Laura angrily denies that she is hallucinating. Suddenly Laura stands up and smiles at Rose, then slits her throat.

Rose is traumatized by the event but tells her boss and the police that she is fine. One of the detectives assigned to the case is Rose’s former fiancé, Joel.

Of course, now the violent demonic spirit begins to haunt Rose. She learns that four days ago Laura witnessed the suicide of one of her college professors. Eventually things go from bad to worse and Rose becomes distraught herself. So much so that her boss and her current fiancé, Trevor, begin to think Rose needs to commit.

Rose enlists Joel’s help in tracing the story of the college professor’s suicide. Can Rose find the solution to stop the demon?

SMILE is good at scaring moviegoers, but its goals seem to be limited to that. Moreover, the unsatisfying ending offers no real relief from those scares and no victory over the demon. This is not surprising since at no point in the story does Rose turn to God or the Bible, let alone Jesus or a Christian pastor, to oppose and defeat the demon. Instead of confronting the demon with Christian or biblical things, victims and potential victims of SMILE use vaguely occult solutions or humanistic solutions to overcome it, such as humanistic/secular psychiatric solutions. At one point, Rose even contemplates killing someone to break the demon’s suicidal ideation spell.

SMILE also has a lot of foul language and gruesome violence. Finally, Rose is living with her new fiancé, and he’s not very supportive. In fact, the film suggests, through Rose’s interactions with him, that he is not very supportive because he has a totally humanistic/secular worldview and is skeptical of demons and the supernatural. Given this, it’s baffling why the filmmakers don’t have any of the characters turning to a religion, not just Christianity, to deal with the demon.

MOVIEGUIDE® can’t think of a good reason for movie buffs to go see this obnoxious and unsatisfying movie.