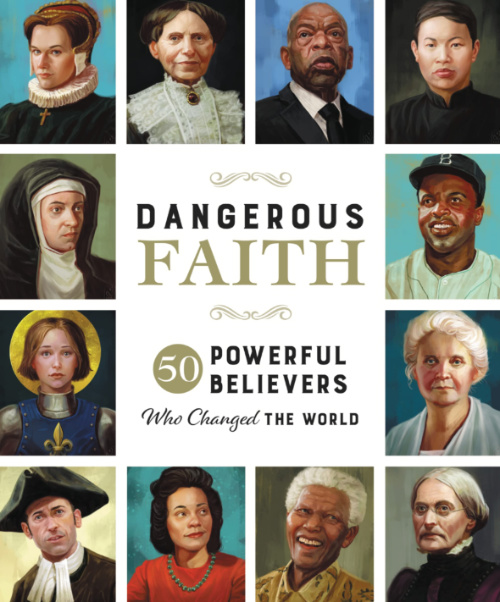 Sight Magazine – Books: A celebration of the lives of those whose faith has impacted our world

“Dangerous faith makes for interesting reading, especially for those looking for an introductory point to begin exploring the history of the Christian faith and the lives of those who came before us.”

Ask 10 people to compile a list of famous Christians through the ages and, depending on its length, Bible translator John Wycliffe, Salvation Army founder William Booth and American Catholic activist Dorothy Day might just be included. on several of them. But less likely to do so are Tudor-era Protestant martyr Anne Askew, Chinese evangelist Wang Ming-Dao and Phillis Wheatley, the first black woman to publish a book in the United States.

Written by Susan Hill whose previous books include Dangerous Prayers: 50 Powerful Prayers That Changed The World, and with illustrations by Darko Stojanovic, dangerous faith includes the faith journeys of some well-known personalities as well as those whose stories are lesser known. Through a series of short biographies – each no longer than two pages, it tells the stories of those who have (mostly) come before us in the Christian faith.

Although there are a few biblical figures included in the list – including Jesus’ mother, Mary, Esther and Rahab – and one who was instrumental in the early church – Justin the Martyr, the majority of those who featured in the book lived from as early as the 18th century (although only one person featured in the book is still alive – American disabled Christian activist Joni Eareckson Tada).

Considering it’s published in the United States, it’s perhaps unsurprising that more than half of those selected are American. There are also a considerable number of British personalities represented, but just a handful of personalities from elsewhere.

Of course, a list like this is always subjective – there are plenty of big names not looking here, including Martin Luther, Jan Hus and C. S. Lewis, but it would have been interesting to see a wider representation of personalities outside the English-speaking world. Without an introduction to the book, however, we don’t really have a clue how the list was compiled (aside from the fact that these are all Christians whose faith has had a huge impact).

Still, dangerous faith makes for interesting reading, especially for those looking for an introductory point to begin exploring the history of the Christian faith and the lives of those who came before us.

It’s the kind of book you can dive into when you have a few minutes, put it down, and come back to it. It could also be a useful resource for families to use to deepen their understanding of the Christian heritage that preceded them. And, of course, it’s a great conversation piece as a coffee table book at home or in the workplace.