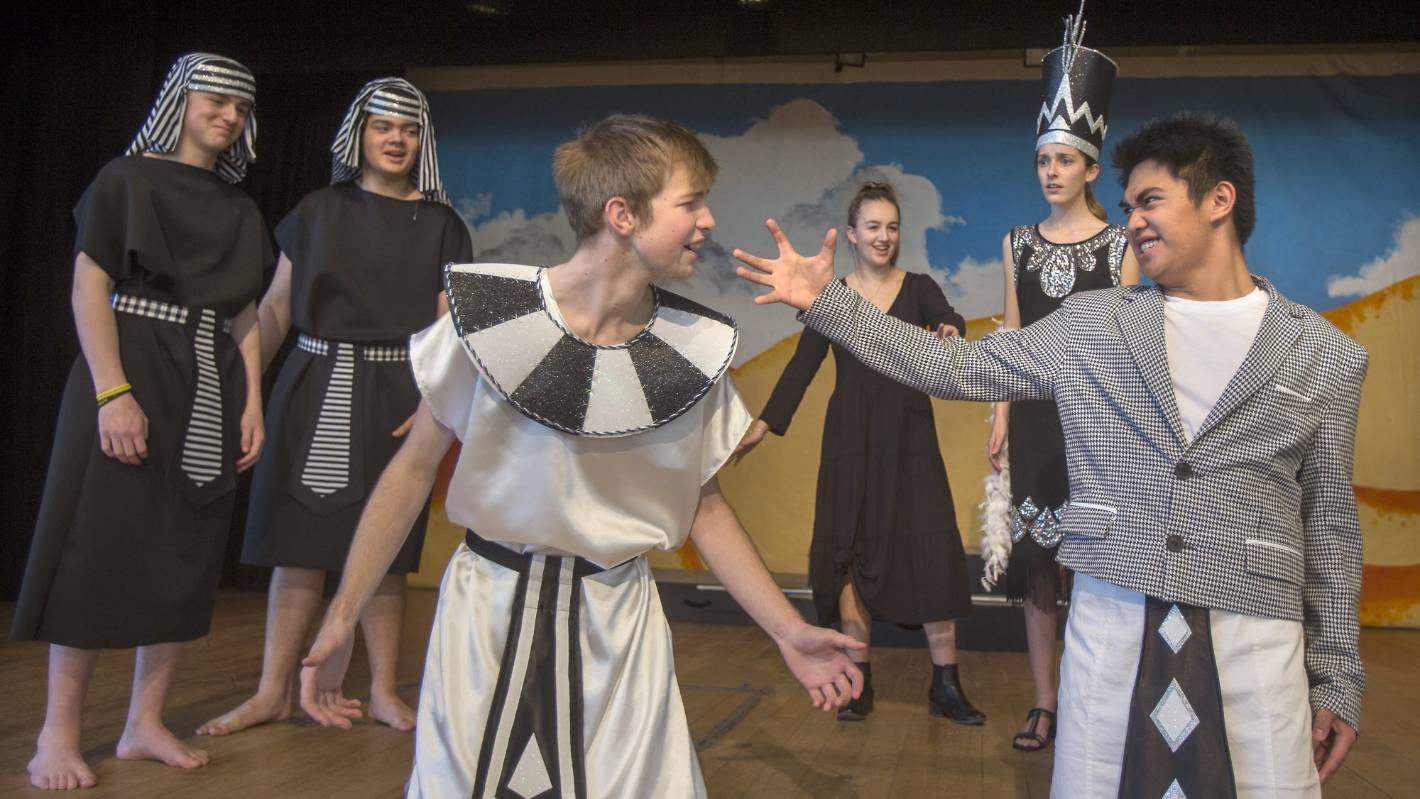 Schools giving life to a biblical story that has become musical

Timaru Girls ‘High School and Timaru Boys’ High School are busy in their final week of rehearsals for their production of Joseph and the Amazing Technicolor Dreamcoat. From left to right, Patrick Howden and Abraham Hix, as slaves, Ethan Chittock, as Joseph, Macy Shields, narrator, Sophie Vaughan, as wife of Potiphar, and Karl Omofoy, as Potiphar .

The musical story of a young man with visions and a coat of kaleidoscopic colors will be told by two high schools in Timaru.

The annual Timaru Girls ‘High School and Timaru Boys’ High School production, which runs May 28-31, is Joseph and the incredible Technicolor dream coat.

The show follows the journey of Joseph sold into slavery by his brothers, falsely accused and imprisoned, and his ultimate rise to the rank of the pharaoh’s right-hand man.

READ MORE:
* Crazy bark from Bruiser and Rufus in Legally Blonde auditions
* British murder mystery with six possible endings will be premiered in Timaru
* Fairytale characters come to life as costumes arrive
* Into the woods ready to unleash magic, mystery and music

“We had a good group of boys and girls that we could lean on. Plus, it’s a really good show,” Chapman said.

Timaru Girls staged the production in 2005, but felt it was time to revisit it, especially given developments in sound and lighting, he said.

While sticking to the traditional scenography, alternating between a desert scene and a background of the head of a sphinx, there would also be some “topical touches”.

“The series contains a number of parody songs.”

The genres include a rock and roll track performed by the character of Pharaoh and a ’60s themed ensemble that features one of the big dance numbers from the show.

“It’s about getting the song right, the music right, and the dancing right. “

Costumes were made by staff and students, including Joseph’s coat.

The show takes place every night at 7:30 p.m. and will be held at Girls’ High’s Nora Dickie Hall. Tickets cost $ 20 for adults and $ 15 for students, and are available at both school offices.