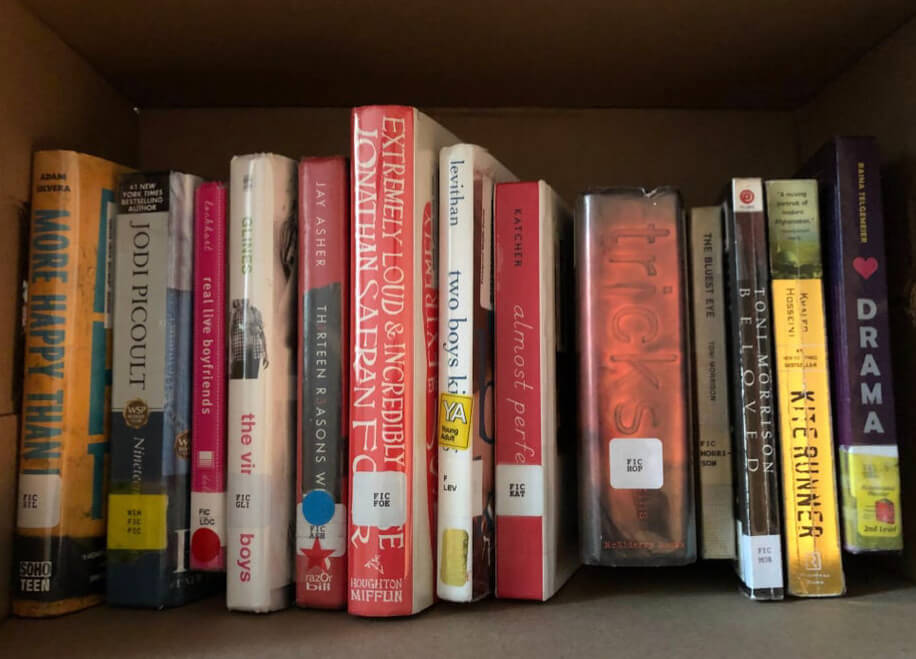 As the Polk County School Board wrapped up its meeting Tuesday night, Vice Chair Lisa Miller and Superintendent Frederick Heid sought to set the record straight on what they called misinformation about 16 library books that had been challenged as pornographic or age-inappropriate.

Conservative critics, including members of County Citizens Defending Freedom, the organization that filed a complaint about 16 books found in some Polk school libraries, said they were unhappy after a process to accept the 16 books, which would require parental permission specifically for these titles, was removed as an option last week.

“I’d like to talk a little bit today about misinformation and what it does to a community and what I’ve been through personally,” Miller began. She is running for re-election against Del Quary and Jill Sessions.

“It is significant that my 76-year-old parents were harassed at home. I was harassed in public by someone from Citizens for Freedom – or whatever the group is called – telling me my son is not autistic, he is retarded. Use words like that. And I use it for my campaign.

Miller’s 20-year-old son Michael has been diagnosed by doctors as profoundly non-verbal autistic.

“What gets used for campaigns is fodder on a policy that we already have — we have a policy,” Miller said of the opt-out policy. “If you are interested in books that belong to your children’s school, you go to the school and ask for an audience for the committee meeting. This has always been our policy. I respect the law. I respect the law.

In the sheriff’s letter, Flowers explains that “our agency has received a criminal complaint regarding alleged pornographic and/or obscene material” in Indian River County public schools from the organization Moms For Liberty. Their list of complaints contained 155 books; all 16 Polk County books are on this list.

According to the Indian River Sheriff’s Investigation Report, a nearly identical complaint was filed by people associated with Moms for Liberty in Flagler County in November 2021, around the same time complaints surfaced for the first time in Polk County. Book challenges have grown throughout Florida and the United States over the past year.

“After a thorough review of the content by our Supervisor of the Special Victims Unit, which has the unfortunate task of dealing with child sex crimes, we have determined that the circumstances as a whole do not permit us to make an arrest. in this matter,” Flowers wrote in a letter to her school board. “However, based on this review, we do not believe this content is appropriate for young children, although it does not rise to the level of a crime…Some of the content in these books is highly questionable and I certainly wouldn’t want my child to have access to it.

Flowers also recommended that the Indian River County school system revise its policy to allow for stricter oversight before books such as these are made available to children. Polk County Sheriff Grady Judd shares the same sentiment.

Judd said Wednesday that the Polk County Sheriff’s Office did not investigate the books, but told CCDF members that the books did not rise to the level of pornography.

“I explained to them that anything vile, mean and inappropriate was not legally obscene,” Judd said. “Despite my opt-in suggestion, the school board chose to go in a different direction. But it’s their decision; This is not mine. We did not conduct a criminal investigation or a literary review or my office did not. And it’s not up to me to do the literary reviews.

At the school board meeting, Miller said she agreed with Sheriff Flowers’ conclusion.

“Just like me, he may not like what he’s reading in these books, but he understands that it’s not pornography (or) breaking the law,” Miller said.

Miller then invited Heid to respond to questions and accusations about “how badly the Polk County School Board wants to engage our children in deviant and sexual behavior,” in the words of an email he received. this week.

Heid pointed out that the books are not given to students, nor are they part of the PCPS curriculum or required reading for any class in more than 150 schools in the district. They are available in some libraries.

Two books – “The Kite Runner” by Khaled Hosseini, which depicts child rape, and “Beloved” by Toni Morrison, which deals with bestiality – are recommended reading for Advanced Placement English classes or college level, supported by the College Board, says Heid. During the book review processHeid recommended that “The Kite Runner” and “Beloved” be retained in the 14 high schools or technical colleges from which they had been removed for consideration.

“We have always had and maintain the policy that parents can remove their children from these reading materials and request an alternate reading assignment,” Heid said.

Four of the books were voted on by all members of each committee – including CCDF members – to be returned to the PCPS library shelves: “Drama” by Raina Telgemeier, “George” by Alex Gino, “Thirteen Reasons Why” by Jay Asher, and “Two Boys Kissing” by David Levithan.

“It’s not something we take lightly. And I believe we’ve provided a great opportunity that far exceeds what the state requires in any law, by parents and opt- out,” Heid said, noting that the district is a year ahead of schedule by providing a searchable list of books for parents to research and opt out of, if they wish.

The 16 books in question have been highlighted on the online school book list where they are available in the library to make them easily searchable by parents.

“Some parents contacted us very recently…and said, ‘I went to my kid’s school and I don’t see any of the highlighted books that were challenged,'” Heid said. “It’s just because none of these books exist in your child’s school. Now parents can choose to select other books. That’s why we created this process…to allow parents to make an informed decision.

Parents who want to check what books are available at their child’s school and wish to unsubscribe can do so through the PCPS. Parent Portal. A short video shows the process.

Heid also explained that the reproductive health book “It’s Perfectly Normal” by Robie Harris, with graphic illustrations of naked people and people having sex, only exists in one public school in Polk County – Haines City High School – and it hasn’t been verified. at all in the past two school years.

“It’s the only book that exists in the whole school district and it’s at the high school level and yet a lot of people have referred to this book because it’s…illustrated and they assumed it was available for primary school students. It’s not,” Heid said.

Heid said CCDF members filed a complaint with Florida Education Commissioner Richard Corcoran in Tallahassee and were told the Florida Department of Education would not be removing the books.

“I believe the commissioner also shared that his own children read most of the books as part of their studies,” Heid added. Efforts to reach Corcoran went unanswered on Wednesday.
Parents who wish to remove their child from any books have until midnight tonight (Wednesday August 17) to do so.

“As of (Tuesday) afternoon, only 42 parents have opted out of disputed books, with approximately 116,000 students in Polk County public schools this year,” Heid said. “That equates to 0.036% of our families. And I know you’re going to argue because they, like we heard arguments initially, that a lot of our families aren’t engaged. And I wouldn’t disagree… But to assume that 99.6% of our families don’t care about their children’s education is a false narrative, and it’s dishonest.

Heid said Tuesday that the 16 books were not challenged at any private, parochial or charter schools in Polk County, where he said he knew the books resided because those schools use the same book management system. library books as PCPS.

“When I asked our plaintiffs, who were asking for books to be taken down, why those books weren’t being challenged, I was told, ‘It’s coming soon’, and yet here we are, 10 months later , and there has been no movement or request to remove these books from these places… Our public schools are not where many children of the petitioners attend.

Several council members have expressed their anger at the CCDF and/or its members saying that they and/or the Polk County Public Schools want to distribute pornography to children. Robert Goodman, administrator of the Facebook page managed by the CCDF “PCPS School Board Applicants (Districts 3, 5, 6 & 7)posted a meme Aug. 3 of Sheriff Judd protecting kids while Pennywise, the clown from Stephen King’s novel ‘It’, tempts kids with some of the novels and the line, ‘Meanwhile, public schools are nursing children. children with pornographic content”. The other two administrators of the page are listed as Amanda Jade Hanson, “Works at County Citizens Defending Freedom and Macy’s” and the Facebook page “County Citizens Defending Freedom USA”.

Goodman spoke at Tuesday night’s school board meeting and expressed disappointment that an opt-in option for the 16-pounder was no longer available. He also argued for a book rating system, similar to a movie rating system that has been in place for 50 years.

“The rollback is unfortunate and we will be filing police reports against the board, the superintendent and anyone who distributes the material in question because it violates state law and statutes,” Goodman said. “Anyone who distributes content that violates 827.012 will be subject to a criminal complaint. Let me remind you that Governor DeSantis just removed a state attorney for breaking the law and we only ask you to obey the law. Nothing more. We will protect the children of Polk County, even if you don’t.

Last Sunday, Goodman and Sarah Calamunci, head of the CCDF USA electoral division, both made [email protected] or 863-272-9250.

Movie Review – They / Them – DelmarvaLife