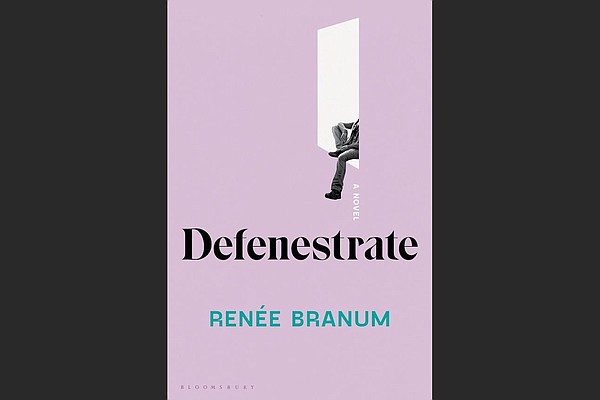 ON THE BOOKS: The novel abandons the concept of family traditions

Philip Larkin’s most famous poem, “This be the Verse”, cannot be printed in a general interest newspaper.

They may not want it, but for better or for worse, we inherit our parents’ business. Some of them are in our genes, a marker for cancer or hair loss or alcohol abuse. Part of it is in the superstitions they pass on articles of faith or bad information they believe.

Before the internet hijacked the word, it was common for those in the psychiatric field to say that we were made up of “genes and memes” – cultural information inherited from our parents and ancestors.

Renee Branum’s debut novel “Defenetrate” (Bloomsbury, $26) is about twin brother and sister, Nick and Marta, who are given a legend by their mother that their family members are cursed to die for. .

Apparently, in 1895, their great-great-grandfather, while supervising a building project in Prague, “gently nudged the back of a Roma stonemason” and sent him hurtling to his death from the window of a church steeple.

The act of throwing someone out of a window is called “defenstration” and is said to have been coined to describe two incidents in Prague.

In 1419, seven city officials were executed by being thrown from City Hall, an incident that precipitated the Hussite Revolution. Then, in 1618, disgruntled Protestants threw two royal governors out of a high window in Hradcany Castle, sparking the Thirty Years’ War. (There was yet another defenestration that took place in the city in 1483, but this is not generally considered a “major” defenestration since only one city official was killed – the other seven councilors were already dead when they were thrown out the window.)

Defenestration was not uncommon in the Middle Ages; it was often an act of mob violence with political overtones imbued with a certain symbolism. (Some may recall that in the Hebrew Bible, the idolatrous Jezebel was defenestrated by her eunuch servants at the behest of the conqueror Jehu.)

The defenestration of the stonecutter at the hands of the twins’ great-great-grandfather could have been an act of revenge; the victim may have seduced the youngest daughter of his ancestor. In any case, the incident was not considered an accident and precipitated a hasty immigration to the American Midwest, where Nick and Marta grew up hearing stories of how various relatives suffered and sometimes survived. terrible falls.

Nick, in particular, became obsessed with practicing falls. The twins fell in love with Buster Keaton, whose theatrical film career was built on his apparent rubber boning.

Branum weaves in some metafictional touches; it makes Evelyn McHale, a 23-year-old woman whose body was photographed immediately after she jumped to her death from the Empire State Building’s 86th-floor observation deck, a distant relative of the twins (the photograph, often referred to as “The Most Beautiful Suicide”, shows her body seemingly at rest).

Among the true stories discussed in the book are those of Juliane Koepcke, who survived a fall of nearly 10,000 feet after the plane she was in was struck by lightning, and Frane Selak, a Croatian who had a remarkable streak of good or bad luck depending on your perspective.

After a revelation that shocks their deeply Catholic mother, Nick and Marta travel to Prague, the scene of their family’s original sin, to try to understand their history and their destiny.

There is a prominent story of how, after returning to the United States, Nick suffers his own severe fall, which Marta suspects may have been a suicide attempt. In the meantime, she slips into dark regions, drinks too much, and simmers in regret that she didn’t pursue her own dreams.

But the story of a broken family is not the main reason to invest in “Défenestrer”. Branum proves to be a remarkable writer, with a lyrical and surprising voice that carries the reader away even when the plot seems to evaporate.

It’s a book of vignettes, of well-rendered episodes that look like experience, so that one is tempted to infer something about the author’s life. (Totally unfair, I know.) Still, “Defenetrate” reminds me more than a little of Jhumpa Lahiri’s presumably semi-autobiographical novel “Whereabouts” from last year.

We were on the top floor – the only apartment in the building with east and west facing balconies. Some days Nick was on one balcony while I was on the other, watching both horizons like a pair of sentinels.

Other days we move from one to the other together in the sunshine, absorbing or avoiding the light, depending on the season. We had no living room or common space – just a shallow entryway opening into the two bedrooms on one side and the kitchen on the other with the bathroom in between…

We drank dark beers and made toddy with plum wine and fruit tea. We drank cheap boxed wine which you could buy in the markets for only 25 crowns… Drinking together seemed fair because it meant whatever day or week we were, at that time , sharing the same sorrow or joy.

It is an investigation into the cost of closeness, an episodic and accretive study of how we construct a self from the remains and wishes of family traditions.

It’s about how complicated it can get when you love people, and how we shape our stories from the materials our ancestors provide us with – genes, memes, and the illogical magic of family.