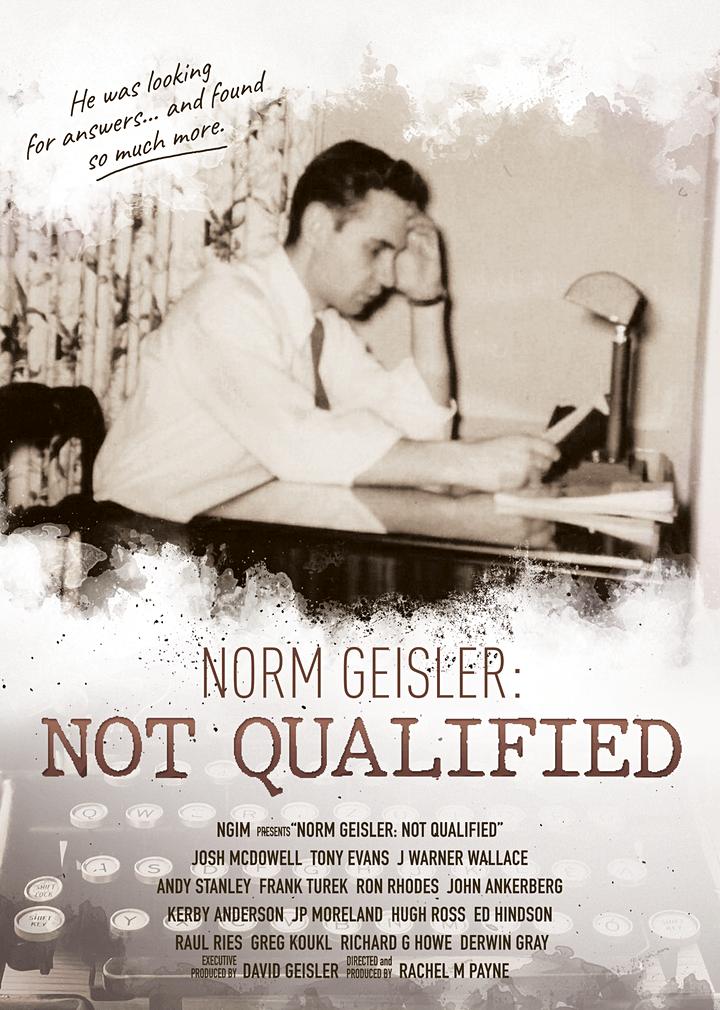 Very strong Christian, Christocentric and Biblical worldview advocating for the Bible, Christianity and the Gospel of Jesus Christ

Some brief newsreel footage showing smoking and marijuana use; and,

Nothing else to say.

NORM GEISLER: NOT QUALIFIED is a 2021 documentary still airing nationwide about one of the top Christian apologists and scholars of the past two centuries, who wrote more than 100 books defending the Christian faith and the Bible and who became a world renowned mentor. and definitive source of knowledge for many people. NORM GEISLER: NOT QUALIFIED is an incredibly informative and inspiring documentary with many insights and truths about knowledge, wisdom, Jesus, Christianity and the Gospel, including Dr. Geisler’s powerful defense of the inerrancy of Scripture, the Holy Bible.

After a short introduction, the film details the beginnings of Norman Geisler. A farm boy from a small town outside of Detroit, Michigan, Dr. Geisler was effectively illiterate until he was 17 years old. At this age, in 1950, he accepted Jesus Christ as his Lord and Saviour. He began working for a Billy Graham youth ministry, preaching in jails and on street corners, telling people about the gospel of Jesus Christ and the Bible.

One day, however, a drunk from Skid Row surprised him with a Bible verse that Geisler didn’t understand. So, Geisler decided he had a lot of studying to do. He either had to get answers or stop witnessing to others. Thus, he obtained two Licenses, two Masters and finally a Doctorate. Before getting those answers and degrees, however, he had one major hurdle. He was still practically illiterate! “God has a sense of humor,” Geisler notes in a video recorded before his death.

By the time he began studying in the 1950s, however, many Christians did not believe in the application of reason and evidence to support the gospel and its message of personal transformation through repentance and faith in Jesus. . Thus, two of the major questions addressed by Geisler in his studies were: What is the role of reason and What is the role of faith in knowing God?

One of the interesting things Geisler realized when he started reading and studying, however, was that God had blessed him with an almost photographic memory. Another thing he realized was that if he wanted to be able to answer people’s questions and objections about the Christian faith, he had to study philosophy, not just the Bible.

“Philosophy provides the context for the evidence,” says Josh McDowell, a longtime Christian apologist who studied under Dr. Geisler. “You don’t have to give up your reason for becoming a Christian,” notes an older Geisler in a recent video. “If you want to know the mind of God,” he adds in another older video, “you must learn to use your own.” He concludes: “We take a leap of faith in the light, but we do not take a leap of faith in the dark.

It took Geisler 20 years to complete his college degrees, including his doctorate, until he was 39. He then decided he was ready to witness to others about Jesus and the Bible.

After writing A GENERAL INTRODUCTION TO THE BIBLE with William Nix, Geisler’s first major accomplishment in his ministry was to be one of the 300 evangelical Christian leaders behind the 1979 Chicago Statement on Biblical Inerrancy, founded by Dr. Ted Baehr’s close friend, Jay. Grimstead. “The basis of everything [Christians] to believe is the Bible,” says Geisler, “and if it is true, the Bible must be infallible or the whole foundation of our faith crumbles. If you can’t trust the Bible on trivial matters, neither can you trust the Bible on essential matters. He concludes in another video: “If you don’t believe in inerrancy, then you are rejecting the authority of Jesus Christ. He adds that the Bible has more documentary evidence and more eyewitness accounts than any other ancient document in the world. If you can’t trust the Bible, neither can you trust human knowledge of the ancient world, an idea that all the best scholars of the ancient world would wholeheartedly reject. The Bible has “more archaeological confirmation than any other book of the ancient world”, claims Geisler. The Chicago Statements on Biblical Inerrancy and Biblical Interpretation or Hermeneutics became a “belief platform” for the entire church. McDowell adds that more seminaries and churches are teaching biblical inerrancy today due to the work of Grimstead and then Geisler in the late 1970s and early 1980s.

The rest of the documentary shows that Dr. Geisler didn’t just work to explain biblical inerrancy to people. Often working with other writers, he also developed important early texts and articles in the 1980s on Christian ethics, philosophy of religion, Christian apologetics, the problem of evil, as well as books and articles on specific cultural issues, such as the pantheistic worldview of STAR WARS, abortion, science of origins, capital punishment, birth fraud and homosexuality. He was a bulldog for Truth with a capital T, the film says.

Accompanying the presentation of the film on the life and teaching of Norman Geisler, the film follows the story of a preacher’s daughter who lost her faith and then regained it by interacting with the teachings and ministry of Norman Geisler . In 1992, he and Ross Rhoads founded Southern Evangelical Seminary in Charlotte, North Carolina.

NORM GEISLER: NOT QUALIFIED is an incredibly informative and inspiring documentary with many insights and truths about knowledge, wisdom, Jesus, Christianity, the Gospel and the Bible. The God of the Bible is an ordained God, says Norm Geisler, and He has a plan for your life that will fulfill your best desires. “The truth can be known,” Geisler says in the film. “Truth is reality. What is true is true for everyone. Geisler “didn’t just give reasons for the Bible,” says Christian author Frank Turek. “He gave reasons for Reality.”

One of Dr. Geisler’s most startling claims is his comment in the film: “It’s not the best possible world, but it’s the best way to access the best possible world.” Later in the film, during a discussion of the suicide of one of his daughters, he states: “No one is without tragedy in their life. [The Bible] tells us that [God is] all good. He is all powerful. If He’s all good, He has a purpose for everything that happens. If He’s almighty, He can draw good from evil, and He knows everything, so He knows where this thing is going. God can see you through the deepest valley in the valley of the shadow of death. The worst things can happen to you, and God’s grace is enough. It really is. Only one life will soon be past, and only what is made for Christ will last. This world is not the whole story.

After being inspired by Jay Grimstead’s 1979 Chicago Declaration on Biblical Inerrancy, Dr. Geisler had a lot of important things to teach people about God, the Bible, and philosophy, which is the love of wisdom. In addition to his strong defense of the Bible, some of his best answers included such things as his solution to the so-called “problem of evil”, his defense of the validity of using reason and logic to discover the Truth of God, his philosophical thought and biblical discussions on ethics and his commitment to preach the Gospel of Jesus Christ while giving answers to each person for the hope in Jesus that is in us. You don’t have to believe everything he wrote or said to admire him as one of the great modern defenders of the Faith. Ultimately, Norm Geisler was qualified by God. If Geisler’s ministry and teachings were of any value, it was entirely thanks to God.