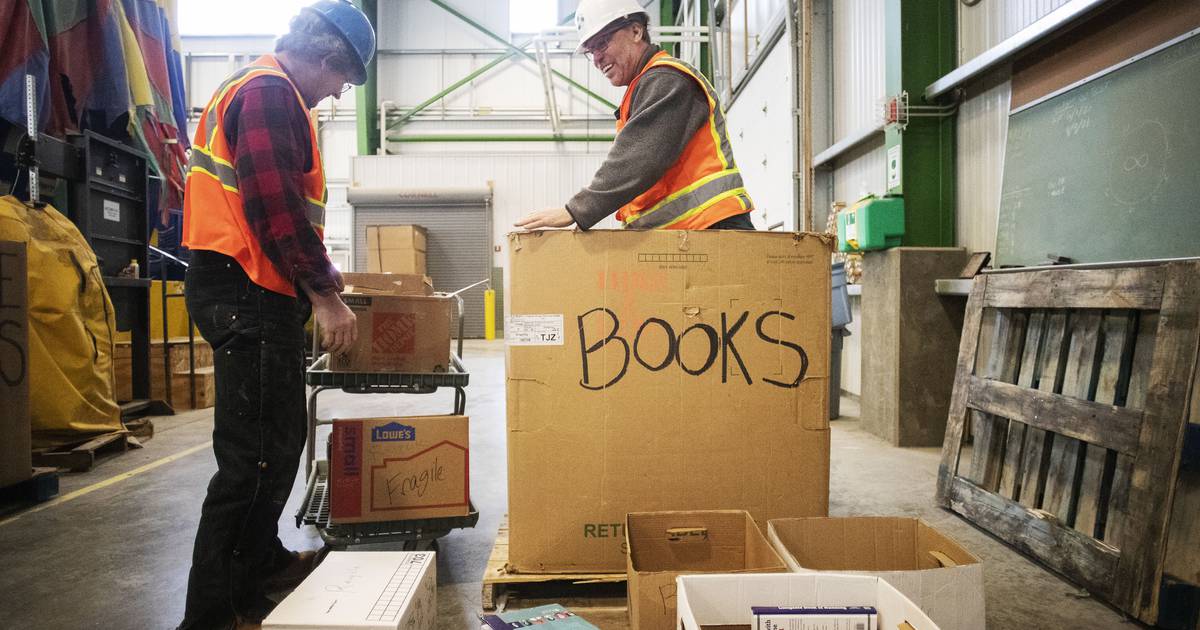 PALMER — Author Alys Culhane started a nonprofit to save books destined for landfill, joining partners in a grassroots effort that now shares more than 60,000 volumes with readers across Alaska.

Culhane’s love of literature was on display on a recent Saturday as she took a break from sorting through used books that emerged from a storage unit behind her.

She recited from memory lines from her favorite book, Beryl Markham’s memoir “West with the Night,” her words flowing smoothly: “How is it possible to bring order to memory? I would like to start at the beginning, patiently, like a weaver at his loom.

After the words faded into silence, Culhane returned to her own work, weaving order from layers of books being prepared for statewide distribution.

Culhane created the Bright Lights Book Projecta Palmer-based nonprofit aimed at salvaging used books and putting them back into the hands of Alaskans, in late 2019. A year later, she quit freelancing and became fully committed to the effort.

Two years ago, while at the Valley Community for Recycling Solutions facility near the Mat-Su landfill, Culhane saw many boxes of books waiting to be shredded.

“I can’t stand the idea of ​​books being shredded,” Culhane said. “It just tears my heart out.”

She rummaged through those boxes and began pairing books with organizations and people in the community. It was then that the idea behind the book project took off.

“The daycares wanted the children’s books, La Fronteras (immersion school) wanted the Spanish algebra books,” she said. “That’s what made me think it would work.”

Culhane expanded her reach and scoured the internet for places that needed books. She began shipping boxes of books to villages across the state.

Meanwhile, unbeknownst to Culhane, a separate book distribution effort was taking shape in Anchorage. Milena Sevigny, community relations program manager for TOTE Maritime, has agreed to help distribute books across Alaska through the BookWaves program run by First Book, a national organization based in Washington, D.C., with a coalition partners working to ship books to Puerto Rico and Alaska.

“Then COVID happened. And here we are with these 40,000 pounds literally,” recalls Sevigny.

Sevigny and other TOTE families worked to organize and distribute the books. It was around this time that she heard about the Bright Lights Book Project, after meeting Culhane by chance at a local goat farm.

“It’s all about partnerships,” Sevigny said.

In its early days, the project was a dispersed effort.

But in two years, the project has flourished while being carried by a team of eight volunteers. In addition to statewide book deliveries, shelves with free books for the public are spread throughout Palmer and restocked regularly. The nonprofit next plans to install shelving around Wasilla.

“We went from 90% shredded to 90% preserved,” Culhane said. “I find something by Maurice Sendak and then I could (see) a little child get that book, and for me there is nothing more gratifying. So, it is worth working more than 60 hours a week.

Books for the project were donated by individuals and the Mat-Su Borough School District and recovered from the recycling center, in addition to some of the 40,000 books left over from the BookWaves project.

Last week, Culhane and Sevigny prepared boxes of books ready to be shipped to the Kiita learning community in Utqiaġvik. These boxes contained a collection of National Geographic magazines spanning decades – from 1970 to 2009 – donated by a woman from Washington State.

“These could have gone to a landfill. This story could have been lost,” Sevigny said.

Future book shipments will be sent to Point Hope and Kasigluk, they said.

“There’s so much value in that reuse…it’s really an asset that’s being destroyed if we can’t stop it,” said Sevigny, who was recently elected chairman of the board. administration of the Bright Lights Book Project.

At the Valley Community for Recycling Solutions at the Mat-Su landfill near Palmer, distribution manager Bill Schmidtkunz and Pete Praetorius — a recycling center board member and Culhane’s husband — spent the after- noon browsing through a palette and a large box of books. The two men sort through books there for a few hours every Saturday, sifting through around 2,000 books of printed material a day on average.

They were undisturbed by loud noises from recycling operations as they worked, sometimes reading a headline aloud. The “Idiot’s Guide to Managing Your Money” and a few outdated medical books made them laugh. They picked out the hardback books and threw the unusable books into a shopping cart.

Every once in a while, books will catch their eye, like an 1884 Bible, agricultural books from the 1930s, or a book about the sexual behaviors of Roman emperors. Once they found an Inuit grammar book from 1922 which is now in Mat-Su College. It is one of the few copies that occupy rare book collections statewide.

As the operation continues to grow, Culhane hopes to find funding for a bookmobile. In the meantime, the most important step is to establish a permanent location, she said.

The non-profit currently works out of a short-term storage unit and the Alliance Church/Meeting House, a space donated by Pastor Sarah Welton. They secured funding for Mat-Su Career and Technical High School to construct a 20-by-16-foot building. Now they just need land to set it up.

“We’re going to be limited in our ability to grow if we don’t have a place to operate,” Sevigny said.

Sevigny’s husband, a welder, will make drop boxes to set up before spring for those looking to donate books.

“I realize how phenomenal it has been, especially for the community to come together around this,” Culhane said.

To find out how to get involved or where to donate, email [email protected]