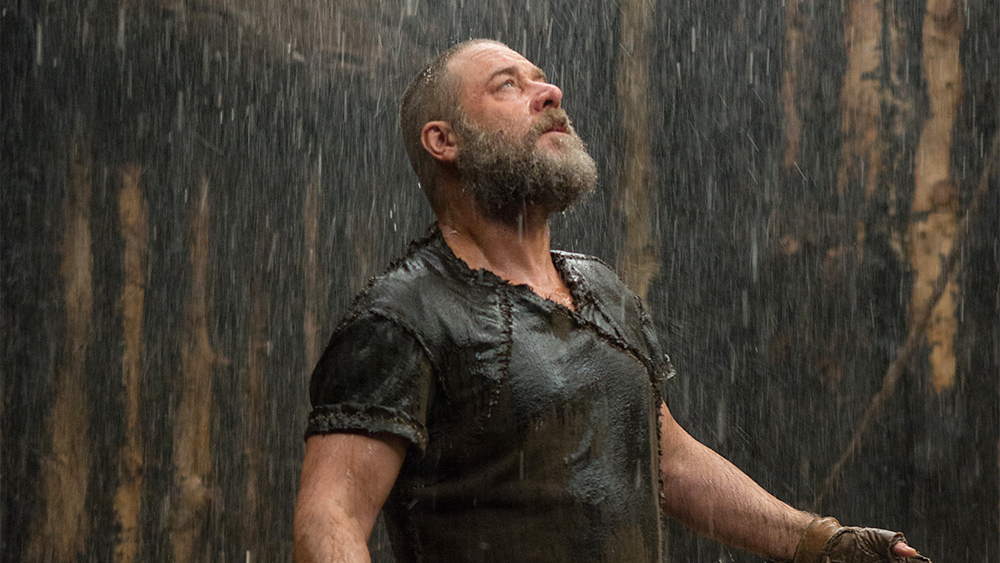 In his flawed, fascinating and utterly extraordinary “Noah”, this ever-daring filmmaker gave us a daring and singular take on the Old Testament – an image that dares to process a sacred text without the awkward messages and rigid piety that we have. come to expect from so much so-called “Christian cinema”, but rather with a thrilling sense of personal investment and artistic risk. Basically, Aronofsky approaches the Scriptures not with the reverence of a purist but with the respect of a provocateur, teasing the difficult and intriguing questions that the Word of God, if you take it as such (and I do), was. always meant to inspire. He’s made an extremely powerful, fully engaged, at times blazingly angry film that will fit the preconceptions of few Christians about what a biblical epic should look, sound or feel like, and trust me when I say that this is not a cause of condemnation, but of honest rejoicing.

Granted, it’s safe to say that at least a few Paramount executives are popping champagne corks – or, at the very least, heaving sighs of relief – in light of the news that “Noah”, after going through months of uncertain chatter ahead of release, opened this weekend to an impressive $ 77.6 million worldwide ($ 44 million in the US), some of which was surely motivated not only by widespread curiosity, but also by largely favorable reviews. It should be noted that several of these recommendations were written by critics of Christian publications – many of whom, while eloquent and enthusiastic in their praise, naturally took care to assure their readers that they could purchase a ticket for “Noah” in all conscience. , without fear that they will somehow defile their God-fearing minds in the process.

As my friend Brett McCracken wrote for the Christian cultural magazine Converge: “Aronofsky may not be a believer himself, but his film respects the belief and engages in it without hostility or condescension. I hope believers will be interested in Aronofsky’s film in the same way. I could not have said it better myself, although I am grateful, as a writer for a largely secular audience, that I rarely have to explain to readers why they should welcome a film that is engaging rather than pampering; that generates questions rather than answers; this brings us to a sympathetic identification with a deeply imperfect protagonist; and it forces us to grapple with the very idea of ​​faith and what exactly it is for.

Everything that “Noah” does, in a pretty remarkable way. Feverish and beautiful, at times grandiose but always deeply felt, bordering on playful but undeniably sincere in its engagement with its source material, Aronofsky’s film is a wonderfully fluid creation, and easily the class so far acts amid a recent wave. of religious themed films that include “Son of God” and “God’s Not Dead” (and will continue this year with “Heaven Is for Real”, “Left Behind” and “Exodus”). The invaluable lesson from “Noah” is that a sincere, genuine religious faith film doesn’t have to be shrill, blunt, or unimaginative; nor should she cling to the very letter of Scripture, timidly and respectfully, in order to access its deeper truths and ideas. Whatever the business situation here, and whatever culture wars are waged in its name, “Noah” feels, right now, like a triumph and a breakthrough – a film that brings a well-worn story to a life. drama so vivid and unpredictable that we are forced to take its characters seriously and grapple with their dilemmas once again. It is the biblical epic that the Christian public, whether they realize it or not, deserve and long await.

In his breathtaking sweep and ambition, as well as his bottomless humanity, “Noah” makes a total joke about all the unexamined attacks, politically inclined dismissals and, yes, that insanely inept Faith Driven Consumer poll that Variety has. reported in February, which asked Christian audiences if they would feel satisfied with a film that “replaces the central message of the Bible with a film created by Hollywood.” There is a major misconception in framing this question, and that is the idea that Hollywood – a sprawling, financially motivated, and morally pluralistic entity that employs both believers and non-believers alike – has one agenda. monolithic when it comes to movie buffs of the Faith. While there is a common attitude towards this largely misunderstood and coveted audience, it is usually a tendency to court and flatter, rather than surprise and offend.

Fortunately, Aronofsky is not Hollywood, nor even a replacement for Hollywood. Given his recent feuds with Paramount for creative control of the image, and also perhaps the relevant comparisons that have been drawn between “Noah” and Martin Scorsese’s much more controversial “The Last Temptation”, Aronofsky is and perhaps always will be a perfect studio underdog – the kind of filmmaker who, even after an Oscar nomination and $ 329 million at the global box office for “Black Swan,” and working at a good scale and budget superior to anything he has done before, maintains a principled distance from the system and relentlessly traces his own creative path.

Watching “Noah,” which makes some concessions to epic fantasy / blockbuster conventions without sacrificing its basic seriousness and moral urgency, you get the feeling that Aronofsky (who wrote the screenplay with his regular collaborator Ari Handel) read the account of Noah’s life in Genesis and perhaps saw in it a container for some of the themes and obsessions that have haunted him throughout his career. He is a director whose characters often know they are destined for greatness, but for whom greatness proves a terrible burden; to watch “Noah” is to recognize the tortured sensibility behind the attempts at transcendence in “The Fountain”, the disturbing altered states of “Requiem for a Dream”, the brutal physical and spiritual sacrifices endured by the protagonists of “The Wrestler” and “Black Swan”. You also feel that Aronofsky realized that there was a place for his angsty theater and trippy aesthetic in the annals of great religious works of art, and that there was no reason why the challenge of l Biblical interpretation be barred from a filmmaker simply because he happens to be a staunch environmentalist, a brilliant fanciful, and, yes, a self-proclaimed atheist.

All of this should trouble the kind of Christian, I suppose, who thinks that proper care of the Earth is strictly the domain of these liberal tree-loving atheists; that our Bible readings should never elicit in us a sense of supernatural wonder or possibility; and that the only artists who could possibly extract anything of value from a religious text are those who readily subscribe to its teachings. To believe such a thing, of course, is to ignore one of the great recurring themes of Scripture, which is that God can and does use the most unlikely of individuals to glorify His name and further His purposes, and is in rather fond of subverting our prejudices about who and what is good, moral and worth emulating.

These biases are exactly what “Noah” is aiming for, most notably through the figure of Noah himself – who, superbly portrayed by Russell Crowe, subtly transforms from a devoted servant of the Creator into a very human monster with a terrifying streak of delusional megalomania. . Charged with the survival of humanity, Noah presents himself as the executioner of humanity; having lost all hope in mankind, he comes to believe that God has also given up hope. Aronofsky is not here trying to smear an unassailable hero of the Old Testament: he simply recognizes the universal human capacity for good and evil, compassion and indifference, while also suggesting how men gripped by convictions given by God can be drawn to the brink of madness and beyond. And the director takes care to show us how this madness happens, in a crucial scene that plunges, alongside Noah, deep into the abyss of clawing and festering human depravity: looking at her, you almost come to understand exactly why even a magnanimous creator might find that a cataclysmic flood is not only the right answer, but also the merciful answer.

Time and time again in “Noah” you feel Aronofsky seeking that sympathetic common ground, not least in a quietly astonishing evocation of the origins of the universe which, like a similar sequence in Terrence Malick’s “The Tree of Life,” generously bridges the ideological gap between creation and evolution. This is a film far more determined to move and provoke than to offend – and, in its own way, to do what teachers and ministers around the world have been doing for centuries – which is to enlighten an ancient story to explore its applicability to the present. For those who want to watch and listen, “Noah” speaks forcefully of our morally confused times, founded as it is on the existence of a God who can nonetheless feel painfully absent in the midst of human suffering. It is a world where miracles are easily observed and where giant rock monsters roam the earth (presented with disarming truth quite in keeping with the prediluvian mythology of history), but where knowledge of the supremacy of God does not ‘t alleviate the often unfathomable burden of following it – or, in fact, of ensuring that anyone will want to follow it at all.

Aronofsky proudly declared that “Noah” was “the least biblical film ever made”. To which I would humbly suggest that this brilliant filmmaker and deranged visionary is perhaps not, in this particular case, the most honest or reliable reviewer of his own work. Aronofsky’s appreciation of Scripture can be selective and apocryphal, but it’s also broad and astute, treating Noah’s slender account as a kind of narrative prism through which the entire book of Genesis can. be filtered dramatically, from Adam and Eve to Abraham. and Isaac. And yet the director also has an eye for the more quietly haunting textual details, such as when he dramatizes a lesser-known but significant detail of Noah’s life, long after the flood has ended, in which the old man falls, drunk. and naked. , and his son Cham looks at him with contempt.

This is a passage of Scripture that has no shortage of competing interpretations, and the one Aronofsky offers is beautifully simple and compassionate: whether in the world that is past or the world yet to come, human beings do not find themselves beyond the need for mercy. One of the least revelations of this “less biblical” epic is that it is an Old Testament story that looks forward, in a spirit of hushed and hopeful anticipation, to the world. New.