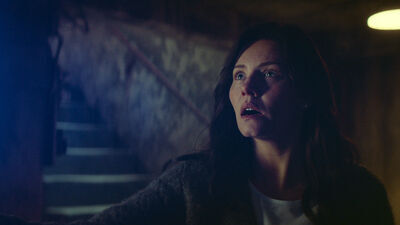 Too bad, because “The Cellar” lacks the manic energy that could have made up for its lack of creepy and/or memorable Lovecraftian horrors. “The Cellar” doesn’t even have to be a smarter or even more faithful homage. All it takes is a little more of something – forceful, rude, thoughtful…something! – to make it compelling enough to stand up to comparisons with its many generic precedents.

The problems with “The Cellar” start immediately and continue throughout. We follow worried and increasingly obsessed mother Keira Woods (Elisha Cuthbert) as she tries to figure out exactly how her reluctant teenage daughter Ellen (Abby Fitz) disappeared into the basement of their new home. To be honest, Keira has just moved into her new country house, filmed in Roscommon, Ireland! And her skeptical husband Brian (Eoin Macken) doesn’t seem so concerned about the strange “glyphs” she finds all over the house. Like a mathematical equation Keira finds on a cornerstone, the Hebrew characters of which can be read as “Leviathan” if you treat the equation as a scramble of words.

Keira must therefore independently advance the plot while her son Steven (Dylan Fitzmaurice-Brady), a video game player, occupies the same space as some slightly supernatural events. Mainly: the balls of a neighboring abacus slide from one side of the thing to the other, without anyone visibly guiding their movement.

I want to joke about this sleepy and often seemingly half-finished script, but I also have to admit that over time I’ve come to like “The Cellar” Due to its wacky plot and often extremely slow pace. I can’t recommend this movie because it has far too many basic storytelling and imagery issues that even generous viewers will have to accept from the start. But… once you get used to its oddly gradual pace and al dente character/personality development, you might find yourself rooting for “The Cellar,” too.

Cuthbert in particular takes Herculean effort to sell Muldowney’s dialogue. Like when Keira learns – from Ellen’s school principal – that her daughter was being cyberbullied. We never really understand or appreciate why Ellen was cast or what these revelations mean to Keira, who tells Brian but never says how Ellen is “still a little girl to me.”

Yet the most immediate problem with “The Cellar” is that everyone but Cuthbert seems to have made this movie on autopilot. There’s no great conceptual continuity to unite his ideas beyond a shapeless, obscure, and possibly unknowable threat. Sadly, that sturdy concept is expressed in crummy ways here, as in conceptually solid but practically dope scenes featuring a seemingly endless set of basement stairs. Or a few seconds focus on a barely detailed mural of screaming human faces. These images are not strong enough, as they are expressed, to be deepened beyond a very short period of time. But the camera lingers on both the staircase and the wall, without much inflection or perspective, and so long that a few moments seem like an eternity.

Books for after the apocalypse | Books borrowed