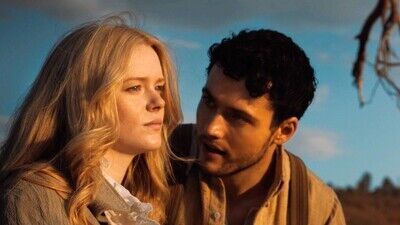 The title makes it clear that there will be no ambiguity as to its destination. First there will be sin and then there will be redemption through prayer. As Shakespeare said, however, the heroine of this story is “more sinful than sinful”. Her name is Angel (the charming angelic Abigail Cowen) and the man who will help her find redemption is Michael Hosea (Tom Lewis). I’ve pointed out the lack of ambiguity before, but to be even clearer, in the spirit of a movie that really spells it all out, it starts with a group of people panning for gold in the mud, the one gleefully finding a shining nugget.

Angel is the most wanted prostitute in town, so prized that there is a daily lottery to be with her. We first see her staring out the window as a man behind her puts some money on the table before leaving. One of the other young women in the brothel said to him, “You must hope for something more in this world. Angel says she pulls it off because “I never look back and I never look forward.” That’s not entirely true as there are a bunch of flashbacks as she looks back, giving us multiple flashbacks to see the horrific abuse she suffered.

Michael is a farmer who prays for a woman. He is led to Angel. He goes to the brothel and pays for his time but just talks to her. She is so traumatized that she is unable to respond to kindness or even simple decency. He doesn’t give up, though he ironically admits, “The next time I pray for a woman to share my life, I’ll be much more specific.” Eventually, he convinces her to marry him. Although she accompanies him to the farm, she tells him that she will only “play the game until I pay you what I owe you”. He’s so gentle and respectful that she begins to trust him, and so she leaves because she can’t be the woman she thinks he deserves. There will be more abuse and more healing before, well, see the title.