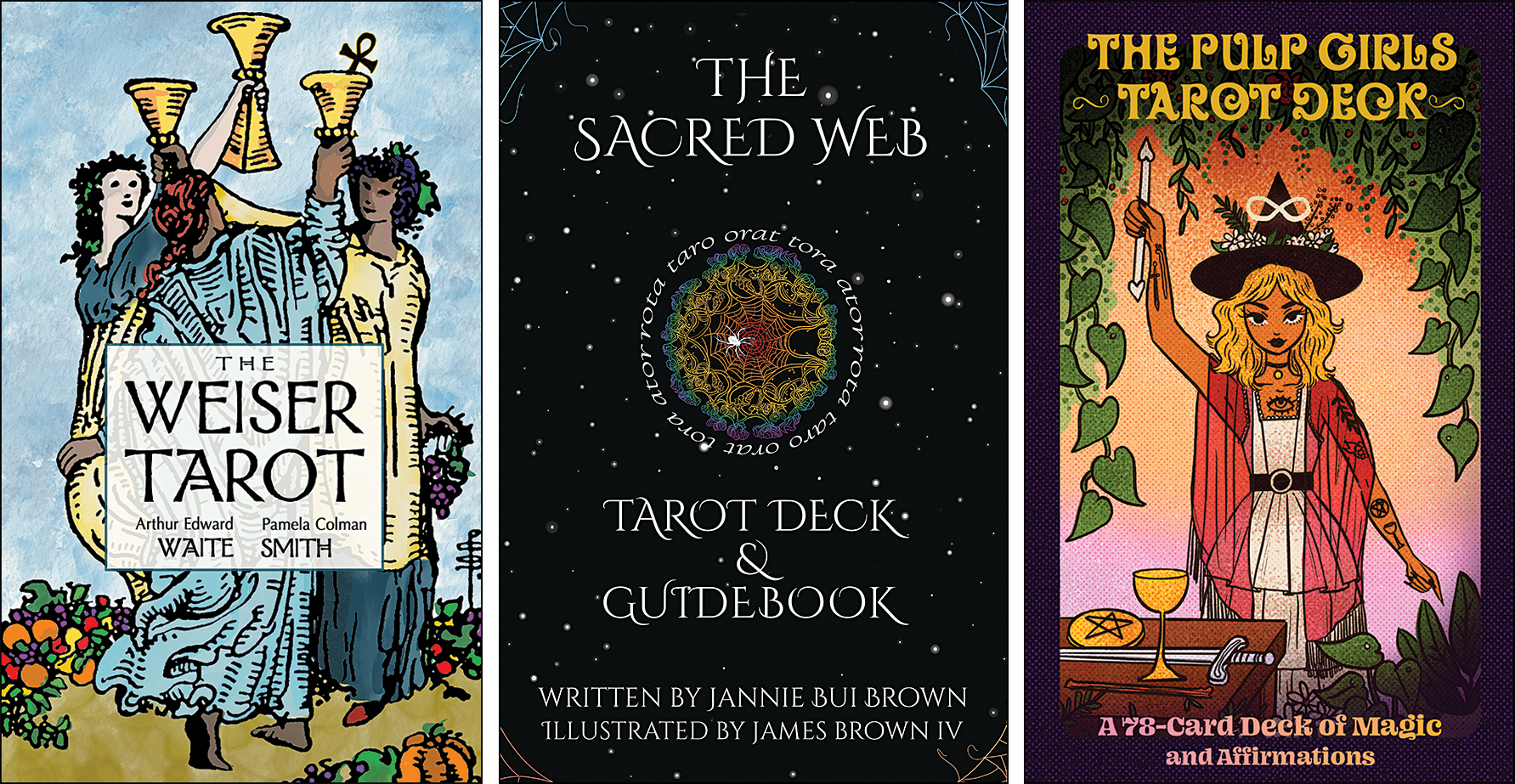 Mind-Body-Spirit publishers mix the deck of tarot cards, offering various authors and a myriad of perspectives ranging from contemplative Christian cards with Bible verses to LGBTQ author card guides. Many draw inspiration from Pamela Colman Smith’s ornate, Eurocentric artwork in the venerable Rider-Waite-Smith 78-card tarot deck, which has served as the basis for generations of divination decks since it was first published in 1909.

Weiser Books follows both trends. In September, it’s the launch The Weiser Tarot, a new edition of the classic Rider-Waite-Smith game with updates from Weiser publishers. The original card reading guide will now offer tips and resources for beginners, the history of tarot, and additional information for those interested in mysticism and Jewish astrology. And Colman Smith’s line art is repainted with a “rich, vibrant palette,” says Weiser associate editor Peter Turner. He calls it “a landmark event in the tarot world”, coinciding with Weiser’s 65th birthday.

The press also publishes Finding the Fool: A Tarot Journey to Radical Transformation (March 2023), a book with contemporary explanations of each card written by Meg Jones Wall, whom Turner describes as a “self-taught queer tarot reader.” Unlike most tarot books, Wall does not include card images; rather, says Turner, it “asks the reader to trust their unique natural sense of intuition, wisdom, and magic. Her writing focuses on keeping tarot intuitive and accessible, using gender-neutral language, and welcoming readers of all identities into the community. One of the main challenges for tarot readers today is that the traditional images used to convey archetypal tarot figures are clearly patriarchal and binary in sexual orientation. And often the most popular tarot decks don’t include people of color.

Turner quotes Wall, who says, “Tarot is not about following rules or adhering to a strict set of narrow meanings; this is not only for a certain type of person.

Magic for every body and creed

Running Press releases three titles that reflect the idea of ​​tarot for all. One is not a game but rather a graphic biography of Colman Smith, written and illustrated by artist Cat Willett. The queen of chopsticks (September) highlights Colman Smith’s experiences, including being abused due to her biracial appearance, being paid very little, and, like many creative women of her time, not being credited or nominated for royalties for his work on the famous bridge. “Many of the same injustices that contribute to the hardships of marginalized groups today have also inhibited Pamela,” Willett says. “The beauty of Pamela’s work is that it has made tarot more accessible, and I think the nature of tarot needs to be reinvented again and again.”

Running Press editor Shannon Fabricator also highlights two other books aimed at broadening tarot audiences. The first is Tarot noir: an ancestral awakening game and a guide (December), by Nyasha Williams, who describes herself online as a social justice griot working to “decolonize” spiritual practices, with illustrations by Kimishka Naidoo. The maker calls it “the deck you’ve been missing, with 78 tarot cards featuring all black depictions of classic tarot figures and iconography.” The press also publishes The Trickster’s Journey: A Tarot Deck and Guidebook (April 2023), by painter Jia Sung, who reinvents the tarot “through the prism of mysticism, folklore and Eastern spirituality,” says Manufacturer.

The Sacred Web Tarot (HarperOne, Sept.), a set of maps and guides written by yoga teacher and artist Jannie Bui Brown and illustrated by her son, James W. Brown IV, offers a “transformational and timely approach that goes beyond traditional and gendered imagery, card names, and interpretations, focused on personal and community growth,” according to the editor.

And at St. Martin’s Press, editor Keith Kahla says the upcoming game and accompanying guide Single World Tarot (Oct.) was created “to encompass many centuries and cultures, embrace our global diversity, and apply to all genres.” The guide is by Australian author Lena Rodriguez, host of Tarot below on YouTube, and Tarot reader Seanna Rose, with writer June Rifkin and illustrator Alexandra Filipek.

Keyla Pizarro-Hernandez, editor of Fair Winds, observes that it’s common in media and mind-body-spirit publishing “to see the same type of group represented – typically thin, white, blonde, cis – and that we are not all connected to this particular community and do not see ourselves reflected in their stories or circumstances. The Pulp Girls Tarot Deck (Oct.), by sisters Cailie and Brianna Mitchell; they are artists known for their illustrations in the style of old-fashioned fiction journals called pulps. Their images, the publisher says, “reflect a more realistic view of the different groups of women that exist around the world — women of color, women with different body types, and women from the LGBTQ community.”

However, a worldview rarely included in tarot deck lists is Christian theology. Now St. Martin’s Essentials steps in with The Contemplative Tarot: A Christian Guide to the Cards (September), by Brittany Muller, who writes a monthly newsletter, blessed vigil, on Catholic saints and liturgical times. The cards include Bible verses, meditation prompts for personal prayer, and “daily reminders of spiritual truths,” according to the publisher.

Oracle decks, free from the archetypes used in tarot, offer images of Heaven, Earth, and the imagination of the deck’s creator. The decks also reflect the mind-body-spirit publishers’ concern to represent and reach diverse audiences whose interests include the search for love, security, and wealth, as well as environmental protection.

For instance, Sacred Nature Oracle Deck (Beyond Words, Nov.), by photographer Holly Wilmeth, shows men, women, and children of various racial and ethnic backgrounds, each “communicating with a different plant,” says Beyond Words marketing director Brennah Hermo. The guide describes the healing power of the plants and herbs depicted. And The Oracle Cantigee: An Ecological Spirit Guide and Creative Prompt Set (North Atlantic, Nov.), by yoga and meditation teacher Rae Diamond, with watercolors by Laura Zuspan, includes a guide to using the cards to “tackle climate change with presence and care,” according to the editor.

Upcoming oracle and tarot titles include the following:

● The Oracle of the All-Seeing Heart (Watkins, Sept.), by tattoo artist Saira Hunjan, is inspired by Hunjan’s legacy and his frequent travels to India. Editor Fiona Robertson says images of “protective beings or talismans” placed in heart temples can be used for “healing and transformation”.

● The Amazon Angel Oracle: Working with Angels, Devas and Plant Spirits (Inner Traditions, August), by shaman Howard G. Charing, features images of spirits against a backdrop of plants and animals from the Amazon jungle, celestial bodies, ancient temples, and more, according to the publisher.

● Magic Days: Your journey through astrology, numerology and tarot for each day of the year (Penguin Life, October), by astrologer Nadine Jane, includes daily mantras, rituals, and journaling prompts aimed at promoting self-care and empowerment.

● The Tarot Spellbook: 78 Magical Ways to Use Your Tarot Deck for Magick and Manifestation (Fair Winds, Sept.) is a traditional Rider-Waite-Smith deck with guide by witch Sam Magdaleno. It focuses on spells, journal prompts, and card-inspired rituals for managing love, money, wellness, career, and more in daily life, according to the publisher.

● Tarot Trick or Treat (Llewellyn, Sept.), by tarot reader and prolific author Barbara Moore, with fantasy artist Jonathan Hunt, is suitable for Halloween or any time users want to face the future without fear, according to the publisher.

● The Unknown Wild Pocket Animal Spirit Deck (HarperOne, Oct.), by author and artist Kim Krans, examines the wisdom of real and imagined creatures, according to the publisher.

Back to main functionality.

A version of this article originally appeared in the 08/01/2022 issue of Weekly editors under the title: Tarot Meets the Times

‘A Holy Conspiracy’ Movie Review: Making the Case for Evolution