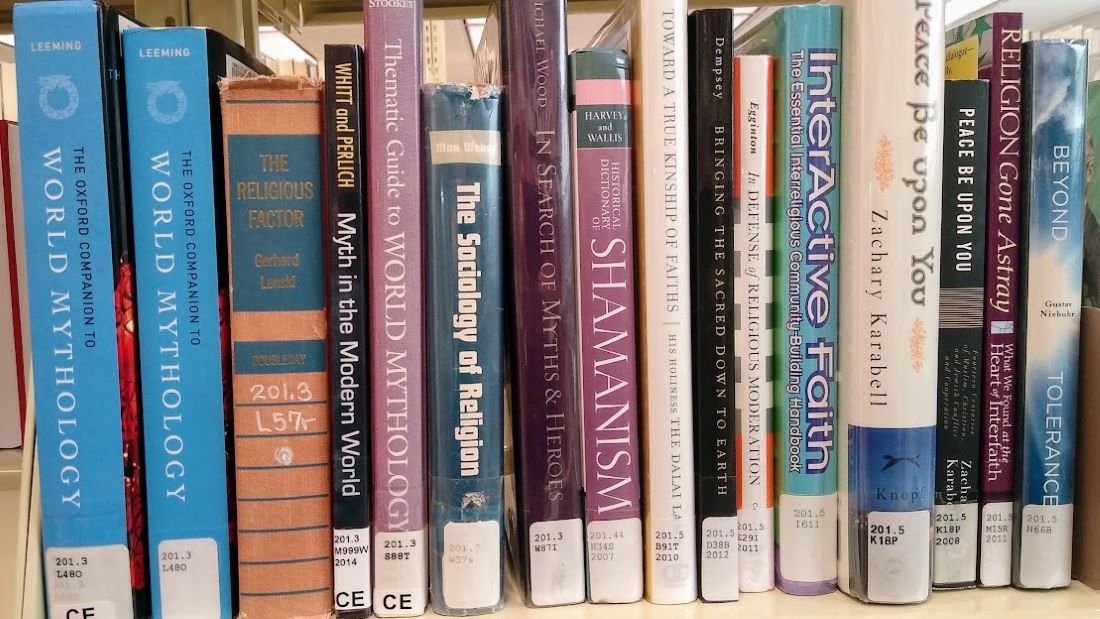 KC Libraries offer a variety of books on spirituality

Image Credit Above: These books on religion, which fall into the 200s of the Dewey Decimal System, sit on the shelves of the Central Branch of the Kansas City Public Library downtown. (Bill Tammeus | Flat Earth)

At the Country Club Plaza branch of Kansas City Public Librarynot far from a space for children’s books, you will find a double showcase labeled “human spirit.”

It’s far from the only collection of books on religion and spirituality at the Kansas City Public Library or other area public libraries, but it’s evidence of how and why these libraries provide customers books and other materials on the eternal questions that religions raise and attempt to answer. .

The Human Spirit Display is sponsored and paid for by an interfaith organization called Cultural crossroadswhose president, Mary McCoy, says: “The idea of ​​the human mind collection actually came from my husband, Greg McCoy, when we were discussing how Crossroads of Cultures could support the library. We already had a long-standing partnership with several local library systems through our programs. After contacting the libraries, the KC Public Library expressed interest and I worked closely with the library’s Joel Jones (he oversees the department that buys books) and others to decide on the location and of the presentation of the collection.

“We were open to the idea,” says Jones. The collection therefore opened in 2014 and continues to be used regularly.

But in addition to the books purchased by Cultural Crossroads, public libraries in the region spend taxpayers’ money on copies of the Bible, Koran and other sacred texts, as well as books and other materials that explore religious ideas. The educational value of these materials makes their cost both perfectly defensible and welcome.

In the light of lessons book ban controversies and the separation of church and state, library officials say their decisions about which books to acquire that fit the religion and spirituality categories are made the same way they choose books in other categories. .

Terri Clark, who oversees the collections management department for the Central Mainland Public Library, puts it like this: “For every title that comes across our desk, we have to find out about the author’s credentials. Is the publisher reputable? How old is the information? These are questions that collectors ask themselves every day. The other question we would ask is if there is an audience for this book in our community.

And when it comes to matters of faith, libraries generally steer clear of books that seem too academic, like the volumes often found on the shelves of seminary libraries.

However, if a library patron really wants to borrow such a book, they can often acquire it through an interlibrary loan system.

For example, Bailey Grim, Head of Collections Services for the Kansas City, Kansas, Public Librarynotes that “we have excellent relations with Donnelly College Librarya Catholic college.

And similar in some ways to the Plaza Library’s Human Spirit Collection, the main branch of the KCK Library has a special collection called the Kansas Room which, according to Grim, includes photos and other materials “about religious institutions local”.

Representatives of several public library systems in the region consistently say they do their best to avoid personal interests and opinions when choosing resources for patrons.

“When you’re considering purchasing material that falls under the religion and spirituality section,” Grim explains, “we approach it the same way we would approach much of our material in the non-fiction section. Our top priority as a public library is that we want high quality, we want value for money and we want materials with a long lifespan, we also want titles that are of great interest to our customers and we want documents accurate. “

Clark adds: “We don’t make content decisions. We do not assign value. We try to keep everything as objective as possible about any book we select. It is important for us to leave all personal values ​​outside. We leave that to our community of readers and users.

These materials represent nowhere near the majority of what public libraries in the region acquire. Grim, for example, claims that only about 6% of non-fiction books in the KCK system fall into the religion/spirituality category. Deborah Stoppello, who helps oversee acquisitions at the Kansas City Public Library, says the costs of these books are only a “small portion of the budget.”

While there is certainly a demand for such materials, Clark notes that “this area is not as in demand as our cookbooks.”

But as library workers seek to give patrons access to core scriptures from various religious traditions, they have noticed something odd.

“Books like the Bible, the Quran, and other spiritual or alternative books like palmistry, those tend to be missed a lot,” says Stoppello. Library systems must therefore have additional copies to replace stolen or lost items.

“It’s basically the cost of doing business,” she says.

Clark of the Mid-Continent Library also says that “we replace our Bibles and Qurans fairly regularly,” but a lot of that is because the texts are too worn and “important to have on our shelves.” clean and fresh books”. ”

When public libraries buy books and other religious materials, they must think locally. As Stoppello explains, “I can’t buy everything. So I have to look at my community. If we were a predominantly Jewish community, we would probably see more books on Judaism. The same if we were mainly a Hindu or Muslim community. Be we are not. We are predominantly a Christian community. So we ask, ‘What are people asking for and expecting to find on our shelves?’

But she adds this: “We have everything from Scientology to the Bible.

This range is a welcome indication of a good public library.

Bill Tammeus, an award-winning columnist formerly of the Kansas City Star, writes the “faith mattersblog for The Star website and book reviews for The National Catholic Reporter and The Presbyterian Outlook. Her latest book is “Love, Loss and Endurance: A 9/11 Story of Resilience and Hope in an Age of Anxiety”. Email him at [email protected]

Thank you for subscribing!

Check your inbox, you should see something from us.

Push Kansas City reporters to tell the stories you love, about the community you love. Donate to Flatland.

An act of resistance, truth and justice