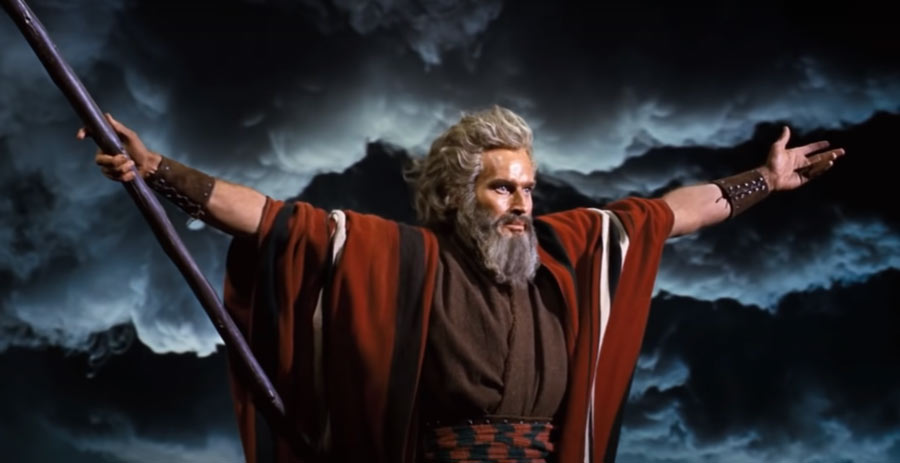 IDAHO FALLS — For many families, the celebration of Easter isn’t complete without the annual review of Cecil B. Demille’s 1956 masterpiece, “The Ten Commandments.”

The three and a half hour saga tells the story of the biblical prophet, Moses, and his role in leading the Israelites to freedom after years of slavery under Egyptian rule. With a budget of $13 million, it was the most expensive film to date and earned more than $80 million at the box office, according to author Marc Eliot.

As Eliot writes in his 2017 book on the film’s leading man, it became “the highest-grossing live-action film of the first seven years of the 1950s”.

The role of Moses made Charlton Heston a star and several years later he was cast in “Ben-Hur”, another biblical-themed film which won him the Oscar for Best Actor.

Almost every year since 1973, “The Ten Commandments” has been part of ABC’s prime-time lineup at or around Easter. The TV Ratings Guide reports that the film’s airing last Saturday earned higher ratings in that time slot than competing networks NBC and CBS. Still, his rating of 0.33 was down from last year’s 0.47.

Either way, it’s a film that continues to impact audiences all these decades later.

Emotionally invested in the theme of the film

Eliot reports that Heston read the entire Old Testament in preparation for this role, and he spoke endlessly of his fascination with Moses to his wife and fellow actors, which annoyed them. As production on the film drew to a close, Heston explained how the role affected him in a diary entry published in Eliot’s book.

“It was all weird and wonderful and awesome,” Heston wrote. “Standing atop Sinai was a deeply moving experience for me… All the Mosaic literature I work on, all the times I read the script, mean little compared to the weeks I spent wearing the clothes and to breathe the air he knew.

Heston wasn’t the only person emotionally invested in the film. DeMille, the film’s director, was drawn to the central plot theme of freedom in tumultuous times.

The Red Scare was on everyone’s mind in the 1950s, and Congress had formed the House Un-American Activities Committee to investigate people and organizations suspected of having communist ties. Hollywood was a target.

DeMille, an American patriot and devout Christian, felt the time was right for a remake of the silent version of the “Ten Commandments” he had made three decades earlier. It had been a hit with moviegoers at the time, and he saw an opportunity to give it a fresh look while sharing a timely message.

“The theme of this picture is whether men should be ruled by the law of God or whether they should be ruled by the whims of a dictator,” DeMille said during the introduction to the remake of “The Ten Commandments. “. “Are men the property of the state? Or are they free souls under God? This same battle continues around the world today.

Studio heads were skeptical at first, but eventually approved the project.

“He assured the studio that his film would have broad appeal,” Eliot wrote in his book. “Once the film was given the green light and DeMille began pre-production, he began to suffer from anxiety attacks about what would happen to his legacy if the film flopped at the box office.”

His worries turned out to be unwarranted, but the project still suffered setbacks.

Numerous takes on various sequences, such as the exodus of the Israelites, delayed the project, increasing production costs. His failing health also played a role. He suffered a major heart attack, requiring hospitalization and several months of recovery. DeMille handed over the reins to his assistant director to complete the shoot.

“On August 13, 1955, after a total of 161 days, nearly six times the time it normally took to make a full-length studio film, Edward Salven (the assistant director) called it the final,” writes Eliot .

“The Ten Commandments” remains a landmark film more than 65 years after its release. His depiction of the Burning Bush and the parting of the Red Sea are iconic scenes in cinema. Even with its entire show, The Deseret News pointed out its many historical inaccuracies in 2010.

“The second half of the film is on much firmer biblical ground. Tellingly, when ‘The Ten Commandments’ airs on the American Television Network each spring, the ratings invariably increase as the film progresses,” writes Eliot.

Yet Heston’s face is what comes to mind for many who read the biblical account, and the Israelite’s deliverance from slavery, as depicted in DeMille’s epic, is one of most recognizable religious stories in the world.

DeMille, who died nearly three years after the film’s release, noted the religious significance of the Moses story during a commencement address at Brigham Young University in 1957.

“Like mighty rivers flowing from a single source, all the great religions of the Western world flow from Moses,” DeMille said. “Upon their broad waterways they carry the precious cargo of their different traditions – but they all share a common reverence for the law of God revealed through Moses.”

Father Stu: Is Mark Wahlberg’s new film based on a true story?