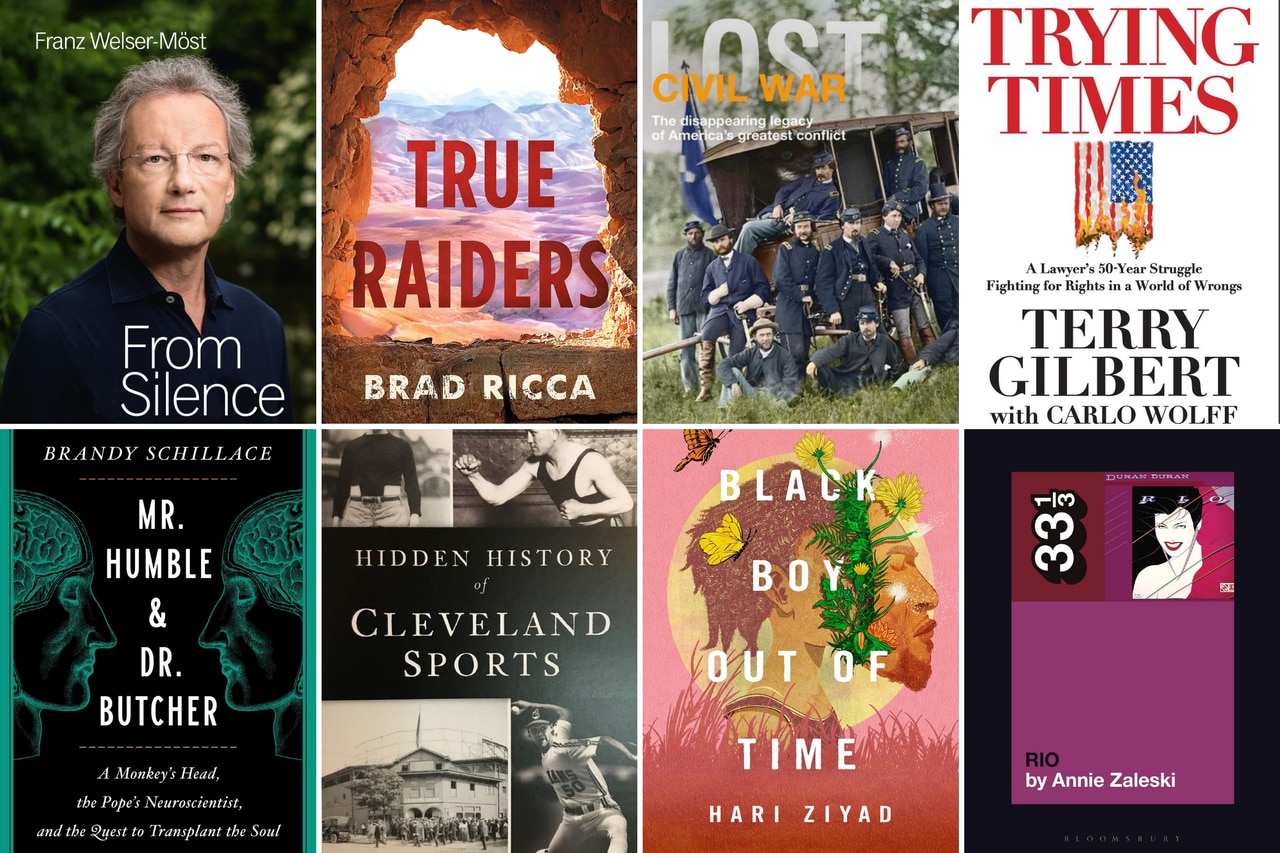 CLEVELAND, Ohio – Maybe it’s time to add more books to your reading list – and we recommend starting with a few pages written by local authors.

This year, many non-fiction books have come out of the Northeast Ohio literary scene. Memoirs, photo collections, wanted stories and more take a look at true stories, past and present.

The list includes prominent authors from Greater Cleveland, as well as writers with strong ties to the area – and in their works, many examine topics and issues related to the Cleveland area.

Consider supporting a local bookstore while you shop for books; here are 16 major independent bookstores in Greater Cleveland.

Check out some of the new releases below:

Gilbert, a civil rights lawyer, shares moments from his career in this memoir, written with friend and journalist Wolff. The lawyer shows why he chose his career path, describing the impact of events such as the Kent State shooting and the Chicago Seven trial – and he also explores the highlights of his career, like the exemption from Clevelanders Rickey Jackson, Wiley Bridgeman and Kwame Ajamu in 2014. (324 pages)

“Black boy out of time” by Hari Ziyad

Author Hari Ziyad shares his take on social issues through his story of growing up in Cleveland and Cleveland Heights with 18 siblings and step-siblings in a religious home. The author and cultural critic moved from Cleveland to New York to attend New York University, where they are based. Ziyad is the founder and editor-in-chief of RaceBaitr, a New York-based publication focused on the intersections between race, gender and sexuality. (313 pages)

Dr. Robert White gained worldwide notoriety for his animal head transplant and brain experiments in the 1970s, sparking conversations about the limits and ethics of science. But the Cleveland neuroscientist and neurosurgeon, who died in 2010, also had different sides: devout Catholic, community-focused doctor, Nobel Prize nominee. This duality is at the center of Brandy Schillace’s new biography of the doctor and the researcher. (320 pages)

“The Music in My Life: Notes from a Long-time Fan” by Alec Wightman

Rock ‘n roll is the common thread of this memoir, which tracks Wightman’s experience in the Ohio 60s and 70s concert scene and, later, his work with his concert company Zeppelin Productions. . These days, Wightman continues to work in music through Zeppelin and his role on the board of directors of the Rock and Roll Hall of Fame. (350 pages)

Local music journalist Annie Zaleski dived into one of her all-time favorite albums with her debut book, “Duran Duran’s ‘Rio’,” which is part of Bloomsbury Publishing’s famous 33 ⅓ book series. Zaleski’s book on “Rio” stems from his longtime love for the band; Growing up in Rocky River, the writer said she remembers taking “Rio” out of the city library and then dubbing the nine-track album on a tape.

“I remember being in the orchestra pit in high school, playing in the pit for ‘My Fair Lady’ and listening to ‘Rio’ on my Walkman. I liked it so much, ”Zaleski said. “In the 90s, whatever the reason, when I was a kid I loved 80s music. It was my thing, I think because the radio stations had flashback lunches, retro lunches. You could hear 80s music everywhere, it was really popular. There is something in there, I really gravitated towards it. (184 pages)

“From Silence: Finding calm in a dissonant world” by Franz Welser-Möst

The longtime conductor of the Cleveland Orchestra received an English translation this year, following its original German release in 2020. Originally titled “Als ich die Stille fand” (“When I Found The Silence »), Welser-Möst’s book examines a conductor’s car accident and its impact on his career. (184 pages)

The third installment of the “Deep Cover Cleveland” series arrived this year, examining today’s local phenomena with interviews and illustrations. The book builds on the first two volumes in the series, which examined women’s history, parks, the arts and more. (212 pages)

Main Street Gourmet co-founder Steve Marks describes his business journey from an abandoned building to a lucrative empire in his memories. The Akron-based wholesale bakery company has impressed presidents, astronaut John Glenn and others. (166 pages)

Cleveland educator Cris Harris shares his family story in his memoir “I Didn’t Love You With All My Heart.” In the book of essays, Harris focuses on his father, the Reverend Renne Harris, who came out late in his life and later died of HIV in 1995. (232 pages)

Civil War sites, encampments, historic buildings and the aftermath of Civil War prisons are all captured in DeMarco’s latest book – with over 200 historical photos. “Lost Civil War” follows several other books by DeMarco, former publisher and writer for The Plain Dealer, including “Mark Twain’s America” in 2019, “Lost Cleveland” in 2017 and “Cleveland Then and Now”. (176 pages)

Ohio’s Richfield Heritage Preserve has had several past lives: a 19th-century farmhouse, a house powered by an experimental electrical installation, and a Cleveland Girl Scout camp. Richardson explores history in his book, published in Arcadia’s “Images of America” ​​series. (128 pages)

Loyalty miles are Belkin’s obsession; the author has collected over 40 million miles over two decades. He explains how he did it and the ploys he used to rack up points, in his book, written while stranded in Mozambique during the coronavirus pandemic. (209 pages)

Akron resident and cleveland.com life and culture journalist Marc Bona shares 24 Cleveland sports stories, handpicked for over 100 years, in his second book. But don’t expect accounts from “The Shot,” “The Drive,” and “The Fumble” – Bona instead delves into lesser-known events like the death of an Indian pitcher in 1993, the death of Luke Easter and Clarence Clemons’ football game that caught the eye of the Cleveland Browns. (176 pages)

“Bruce Springsteen: Alive in the Heartland” by Janet Macoska and Peter Chakerian

Cleveland rock music photographer Janet Macoska has captured many images of Bruce Springsteen over the years, and they are featured in her new book, written by Peter Chakerian. (256 pages)

“The real adventurers” by Brad Ricca

There are no Nazis or magical powers in Brad Ricca’s latest book “True Raiders”, unlike the “Indiana Jones” movie “Raiders of the Lost Ark”. But there are labyrinthine tunnels, biblical codes and secret archaeological digs. “True Raiders” follows Monty Parker’s 1909 expedition. Parker met Valter Juvelius, who claimed to have found a code in the Bible that could lead a crew to discover the Ark of the Covenant. (368 pages)

“Drugs and Other Things to Do in Cleveland” by Francis Elizabeth

Cleveland shows its seedy side in the appropriately titled Francis Elizabeth novel. Drug trafficking, attempted murder, and adult theater tours are some of the events in Elizabeth’s book – which also features artwork by Gary Dumm. The playful story includes true stories from Northeast Ohio and plenty of nods to the city’s history. (261 pages)

“One Year on Broadway” by Kathryn McKendry

Now based in Chagrin Falls, McKendry previously co-produced the Broadway cover of “Once on This Island” with her husband. The renewal and the experience of the couple in putting it is the basis of McKendry’s autobiographical book. (288 pages)

Christine Rich, a resident of Hudson, details her autoimmune disease and how she learned to live with it in her early memoir. The book explores sexism in healthcare, as well as mental health and chronic disease management. (168 pages)

Ivy Zelman of Cleveland grew up in the predominantly male Wall Street investment banking industry and built a successful career as a housing business analyst through her firm Zelman & Associates, in 2007. His advice and business instincts are clear – Zelman predicted the housing crash of 2008. (198 pages)

Get a good start on the weekend and Register now for the cleveland.com weekly “At the CLE” email newsletter, your essential guide to the best things to do in Greater Cleveland. It’ll arrive in your inbox on Friday morning – an exclusive to-do list, focusing on the best weekend fun. Restaurants, music, movies, performing arts, family entertainment and more. Click here to subscribe. All cleveland.com newsletters are free.