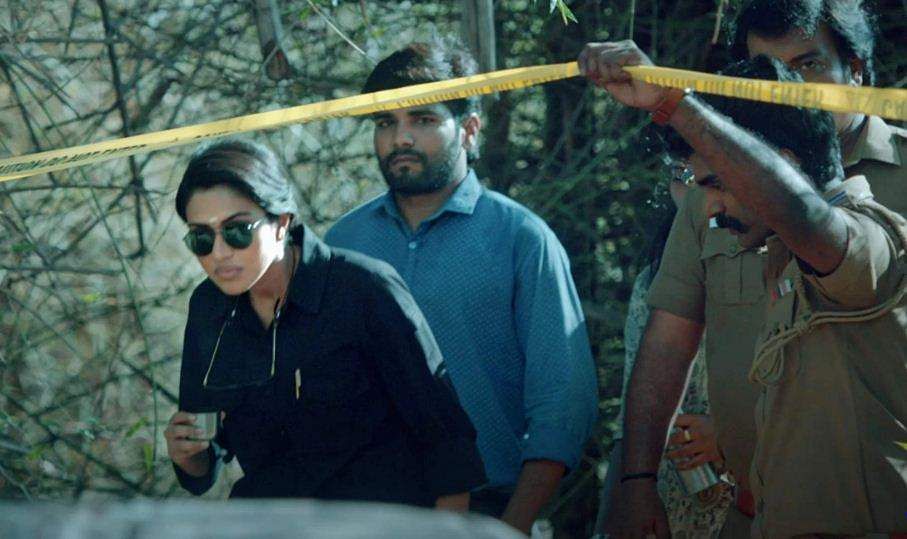 Imagine eating a well-cooked dish where the spices are perfect and the seasoning on point, but the meat is unfortunately rotten. Well I had a similar aftertaste watching Amala Paul Corpse. The murder mystery is tastefully realized with top notch works from Aravind Singh (cinematographer), San Lokesh (editor) and Ranjin Raj (composer). The rotten meat here is the poorly written script and story. This concoction is a truly rare occurrence. With thrillers it’s usually the other way around, good ideas on
paper gets lost in translation on screen.

Editor San Lokesh does a fantastic job of containing the suspense in this ultra-thin story. While the non-linear narrative is a little confusing in places, that’s probably the only element that holds audiences’ interest until the final reveal. Aravind Singh’s frames and Ranjin Raj’s music repeatedly complement each other, and the mood of the thriller is brilliantly set by the works of these two. They don’t make any wood fire either, they know when to hold back and give the audience a break.

Corpse is the story of a police surgeon trying to uncover a series of mysterious homicides and all the clues point to a prisoner sentenced to life, who has not left his cell for years. The biggest of all the details in the story is the reason for his imprisonment. Although the film divulges in several subplots, it never tries to explain why a main character is being held as a prisoner. Everything built by the tech team is destroyed by the massive story rifts.

The Athulya and Riythvika tracks are extremely formulaic and give us instant flashes of memory from a dozen movies that had identical characters. Their invested performance is buried under the loads of clichés that come with their roles.

The other major pitfall of Corpse is his plastic dialogues. Amala Paul had revealed in an interview that the film was originally written to be a feature film in Malayalam but was re-written in Tamil later. This becomes apparent in several places as the dialogues are wordy and even the crucial one-liners fail to pack. The film also has major tropes inspired by Malayalam films. For example, the killer leaves clues from the Bible to hint at his next victim. This idea has already been used in a host of other films, namely Memories (Aarathu Sinam in Tamil).

Amala looks extremely convincing as a bold and nonchalant forensic surgeon. The way his looks and body language are styled is very refreshing, especially among a host of caricatures. Only if the rest of the characters had similar invested writing would the movie have been much more engaging.

All thrillers end at the point where the main antagonist is unmasked. But two common villains I’ve spotted often in all recent thrillers are convenience and coincidence. All the efforts of the filmmakers and writers to build indescribable suspense and an unsolvable affair vanish into thin air when these two villains make their entrance. Corpse is the last film on the list to feed these beasts. And as long as these villains are on the prowl, thrillers will continue to die more gruesome deaths than their characters.