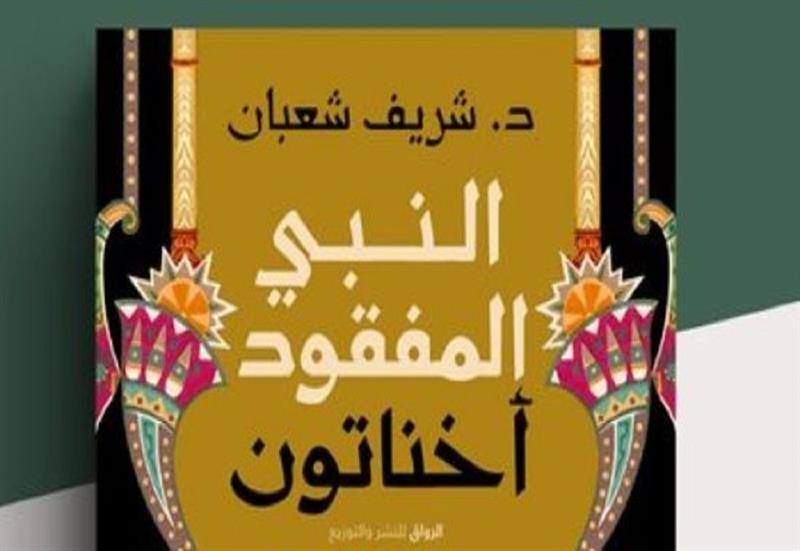 In his latest book, historian and Egyptologist Sherif Shaaban PhD tackled one of the most interesting characters in ancient Egyptian history, Akhenaten, or Amenheteb IV.

The title “The Lost Prophet Akhenaten” gives the impression that Akhenaten could be one of the prophets of the Bible. The idea is not new, many archaeologists, researchers, Egyptologists and historians have introduced the idea that Akhenaton could have been Ibrahim, Joseph or Moses, but none of them have been able to prove their theories beyond a reasonable doubt.

Even Freud in his famous book “Moses and Monotheism” theorized that Moses was one of Akhenaten’s disciples and led the Israelites out of Egypt; The mere fact of writing about Akhenaten by a figure like Freud (although religion and history were not his areas of expertise) tells us about the value of the former.

But linking Akhenaten to biblical prophets contradicts the philosophy he believed in. First, he decided that the sun was the source of power and revelation, not just a symbol. Second, he believed that the true God was embodied in him personally, so he could not have been a prophet. And third, he denied the concept of the afterlife and the judgment that humans will face based on what they have done in their lives.

The book presents an account of Akhenaten’s reign and philosophy in an intelligent style. Shaaban was able to summarize the political and social conditions in which Egypt was before and during Akhenaten’s time in power.

The main idea Akhenaten called his followers to believe was that there was only one true God and the others were not real. It was the first time in Egyptian history that the exclusion of other gods became a policy sanctioned by the king himself.

This was the revolutionary concept that Akhenaten introduced and practiced. He built his own capital, left Thebes deserted and the priests of Amun marginalized and poor. The nobles followed their king to his new capital Tal El-Amarna. Without coming out and saying it outright, the writer gives the impression that they were just pragmatic and would follow the leader no matter who he was as long as it was in their best interest.

Details of Akhenaten’s reign are revealed throughout the book and the writer keeps the reader curious about the beginning and end of this heretical king, or philosopher who paved the way for monotheism in its modern form.

The book contains many details about Akhenaten, starting with his strange bodily form. He insisted that artists portray him as he was, from his way of life in his capital to the many elements that were newly practiced in the royal palace. For example, showing the king playing with his daughters on the walls of temples had never been done before him.

The equality of height between the king and the queen was a revolutionary way of representing the royal family, and the representation of the queen in the image of the “warrior king” was a strong indication of her position in the palace: they all ruled both the empire.

The fall of the empire under his reign has been described as confirming the information that resided in the collective memory about Akhenaten: he was an internally strong king and persecuted his opponents, and refused to fight for the vast empire of which he inherited. The writer revealed that there was a traitor in the palace who stopped the SOS messages from the leaders of the different regions asking for help. But again, Akhenaten’s character was not the warrior type.

There is a contemporary part in the book which is the most interesting and important for the Egyptian government; it is the head of Nefertiti, or “The Stolen Jewel” of Egypt. Shabaan describes the find and how it was smuggled out of Egypt by German thief, archaeologist and explorer L Burghardt.

This person managed to trick the Egyptian antiquities department when they discovered Nefertiti’s head in 1912. They managed to send the head by courier to Germany and it is still there. He succeeded in keeping it hidden until 1923. The writer details the various attempts to bring Nefertiti’s head back to Egypt.

An attempt very close to success took place during the reign of the Nazis; Hitler wanted to win Egypt’s friendship and believed that returning Nefertiti’s head would grant him that wish. Then the führer visited the museum and saw the head; he literally fell in love with the statue and giving it up became an impossibility. Many other attempts were made to recover the head until 2009, but the result so far is that viewers can see Nefertiti in the Berlin Museum.

The last chapter of the writer deals with Akhenaten in literature and theater. The famous Egyptian novelist Naguib Mahfouz wrote in 1985 – three years before winning the Nobel Prize for Literature – his novel “Inhabitant of Truth” (Al-Aesh fi Al-Haqiqa).

The name of the novel is one of Akhenaten’s titles; he gave it to himself by Aton. Mahfouz summarizes all the arguments for and against Akhenaten, ranging from a heretic inventing a new religion and destroying the largest empire Egypt has known in its history, to seeing him as a renewing philosopher who revised and rejected religion and “official” art, among others.

Agatha Christie’s play Akhenaten was written in 1937 but published 40 years later. She followed the historical events according to the different sources and painted the different characters accordingly, but she also added her criminal touch by setting up a plot to kill the king. It was just a hint of Akhenaten’s influence on the world.

We can say with certainty that history and the world differed before and after Akhenaten: was his existence a blessing or was it a curse? Each reader can formulate his own opinion.