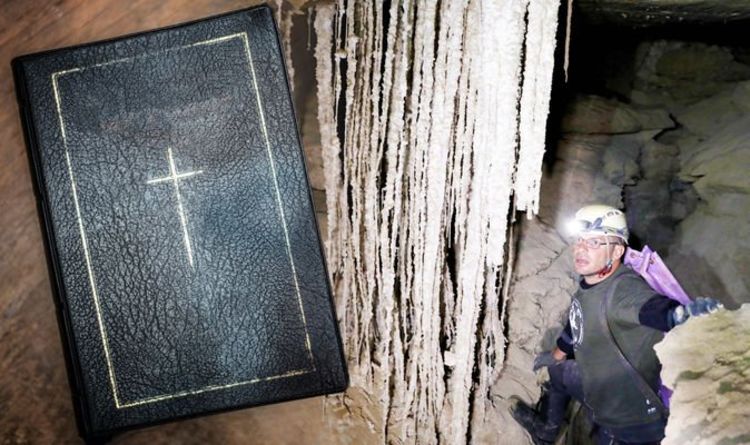 The Malham Salt Cave, near the southern tip of the Dead Sea in Israel, is a labyrinth of dark passages, tunnels, and salt spiers. The ancient cave under the Biblical Mount Sodom has also been dubbed the longest salt cave in the world, following extensive mapping of its internal network. Until now, the coveted title has been held by Iran’s four-mile (six-kilometer) long Namakdan cave, which was mapped in 2006. However, Israeli researchers announced on Thursday March 28 that the twisted Malham tunnels extend over six miles much longer (10 km) in length.

The detailed study of the Mount Sodom cave was commissioned by the Hebrew University of Jerusalem, with the support of international volunteers.

The expedition was led by Boaz Langford of the University of Jerusalem and Bulgarian cave explorer Antoniya Vlaykova.

Mr Langford said: “What is unique about this cave, as opposed to other salt caves in the world, is that it is the longest in the world.”

But how does the incredible discovery relate to the Old Testament of the Bible and the tragedy of Sodom and Gomorrah?

In the Bible, the sinful cities of Sodom and Gomorrah were destroyed with brimstone and fire as punishment for their wickedness.

The story is described in the Old Testament book of Genesis 19:24 and is also referenced in Jewish and Muslim theology.

In the Genesis account, God ordered Abraham and Lot’s family to flee the city after Abraham failed to find 10 righteous living among them.

While evacuating the doomed cities, Lot’s wife looked back at the chaos behind them despite being told not to and was turned into a pillar of salt.

READ MORE: Book of Revelation 2019 Prophecy: What Does the Bible Say Will Happen?

Genesis 19 says, “By the time Lot reached Zoar, the sun had risen over the land.

“Then the Lord rained burning brimstone on Sodom and Gomorrah from the Lord of heaven.

“So he overthrew these cities and the whole plain, destroying all who lived in the cities, as well as the vegetation of the land.

“But Lot’s wife looked back and she became a pillar of salt.

“Early the next morning Abraham got up and returned to where he had stood before the Lord.

“He looked towards Sodom and Gomorrah, towards all the land of the plain, and he saw a thick smoke rising from the earth, like the smoke of a furnace. “

The incredible biblical tale was immortalized inside the cave of Malham where a peculiar salt pillar near the entrance was named “Lot’s wife”.

The caves are estimated to have formed around 7,000 years ago, which predates the Old Testament by several thousand years.

This in itself does not prove the veracity of the Old Testament, but the site of the longest salt cave in the world is an important biblical landmark.

Salt caves like this are a rare geological feature because salt dissolves quickly when exposed to water.

However, incredibly dry regions like the land surrounding the Dead Sea provide ideal conditions for the formation and prosperity of salt caves.

The Dead Sea and Mount Sodom are believed to have formed over millions of years as a result of tectonic activity as the Earth’s plates moved through the Afro-Arab Rift Valley in the Middle East.

Over those millions of years, successive floods in the area deposited vast layers of salt, which can be seen today in the Salt Cave of Sodom.

Geologist Amos Frumkin said: “The layers of salt are extracted from the subsoil, where they settle a few kilometers underground, and while being expelled, they form a mountain, which still rises today, at a speed of about one centimeter. per year.”

And Efraim Cohen, a cave explorer from Hebrew University, said, “All the stalagmites and stalactites, their beauty, their color, they’re really white, they’re shining, they’re amazing.

Schools giving life to a biblical story that has become musical