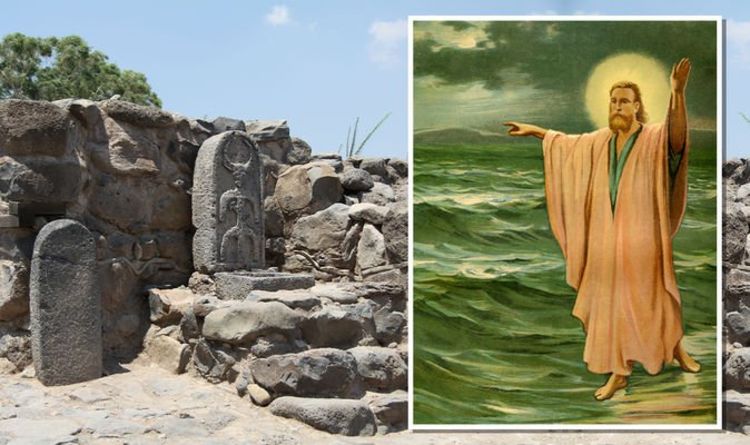 The Bible describes Bethsaida as the hometown of the apostles Peter, Andrew, and Philip, although little is said about its exact location. Bethsaida, however, plays a crucial role in the New Testament because it is the site of many of Jesus’ miracles. The gospel of Mark, for example, tells of Jesus healing a blind man in Bethsaida with the touch of his hands.

Mark 8 said: “He seized the blind man by the hand and led him out of the village.

“When he spat in her eyes and laid his hands on her, he asked her if he had seen anything.

“He looked up and said, ‘I see men, for I see them as walking trees. “

Another major miracle is said to have taken place just outside Bethsaida when Jesus fed some 5,000 people in the wilderness after multiplying five loaves of bread and two fish.

Shortly after this miracle, the gospels tell of Jesus’ disciples who rowed in the Sea of ​​Galilee only to be caught in a strong wind.

Matthew 14 reads: “Later that night he was there alone, and the boat was already a considerable distance from land, rocked by the waves because the wind was against it.

“Shortly before dawn, Jesus came out to them, walking on the lake.

“When the disciples saw him walking on the lake, they were terrified.”

Whether or not these miracles actually happened, archaeologists are desperate to uncover the remains of Bethsaida.

Unfortunately, all efforts so far have been unsuccessful and sparked intense debate.

Roman author and naturalist Pliny the Elder placed Bethsaida on the eastern shores of the Sea of ​​Galilee in present-day northern Israel.

The Judeo-Roman historian Josephus, however, placed the city closer to the Jordan River, which flows north to south between the Sea of ​​Galilee and the Dead Sea.

Other historical sources place the town near the Roman fishing village of Capernaum, which itself sits on the northern shores of the freshwater lake.

Today, archaeologists point to two separate locations as the most likely location for Bethsaida – the archaeological sites of et-Tell and el-Araj.

The two sites, although only 1.2 km apart, have become Bethsaida’s main contenders but, according to a report in Live Science, there is absolutely no agreement at the site that will win the crown.

A team of researchers from the University of Nebraska Omaha believe et-Tell is the Biblical site and have been excavating the ruins of the more than 3,000-year-old colony since 1987.

But the discoveries made at el-Araj have cast a shadow of doubt on this site and according to Jodi Magness, professor in the Department of Religious Studies at the University of North Carolina Chapel Hill, there is “relatively scarce” evidence of it. ‘a flourishing settlement. at et-Tell during the time of Jesus’ ministry.

The settlement of el-Araj has been dated to at least the first century AD and contains a wealth of fascinating finds.

But some researchers have argued that the site was likely submerged under water around the time of Jesus’ life, based on geographic clues.

Of course, this has been disputed by other experts who appear to be convinced that al-Araj’s case is “overwhelming”.

Robert Cargill, archaeologist and professor of Judaism and Christianity at the University of Iowa, told Live Science: “The case of el-Araj is not only compelling; it is overwhelming and becomes more and more convincing with each season of excavation.

Some archaeologists have proposed a third radical theory about the location of Bethsaida – et-Tell and el-Araj were part of the same city.

David Graves, an archaeologist at the University of Glasgow, believes that the main part of the city was found at the modern site of et-Tell, while the city’s port was located at el-Araj.

However, many experts do not think this is a satisfactory explanation.

Rami Arav, professor of religious studies at the University of Nebraska Omaha, thinks this is unlikely, but admitted that residents of et-Tell may have migrated to el-Araj after the town was ravaged by an earthquake in the 4th century AD. .

Mordechai Aviam, director of the Institute of Galilean Archeology at Kinneret College on the Sea of ​​Galilee, agreed, but said historical records indicate Bethsaida was elevated to city status in the first century AD, when el-Araj was probably a larger settlement at this point than et-Tell.

Another fourth possibility is that Bethsaida was located at the archaeological site of el-Mesydiah, although the theory appears to be less popular among experts.

Banning books from Utah school libraries is misguided and dangerous