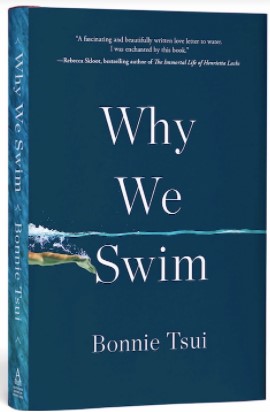 “We should teach ourselves to live with water, not keep it at bay” – Bonnie Tsui

We stand at the edge, toes curled around the bulbous sidewalk, wave as we pull on a cap, adjust our goggles for a satisfying seal, brush the cold from our arms. Then we surrender as we slip into the silky expanse, hoping that it will be at least a degree warmer than the air, and begin caressing each other in the water. We are alone, together.

Author Bonnie Tsui began her book, “Why We Swim” (2020) with the story of a man who nearly drowned off the south coast of Iceland – but didn’t. It turns out his body composition was more sealed than human, keeping him warm, vibrant, and alive. She probably started there because she’s curious about who swims, where and why, and what it has to do with survival.

“This book is an investigation into what seduces us in water, despite its dangers, and why we return to it again and again. It’s clear to me,” she wrote, “that once we can swim to survive, swimming can be so much more.”

The act of swimming, she says, can be an act of healing and health – a path to well-being. Swimming together can be a way to find community, through a shared and loved team, club or body of water. You only have to look at yourself in the water to know that it creates the space to play. Swimming is also about the mind. Finding rhythm in water is discovering a new way of being in the world, through flow.

“This, she says, is about our human relationship to water and how immersion can open up our imagination.”

Bonnie Tsui learned to swim at the age of 5, mainly because her parents did not want her to drown – in the bath, in the pool in the neighbor’s garden, at the beach. Today, she swims at the Albany Aquatics Center near her home, where her 9- and 11-year-old sons are on the swim team. She swims in the ocean, off Pacifica, Ocean Beach or Bolinas. She swims to Alcatraz. She surfs wherever she can catch a good wave.

And, she hangs out at the Monterey Bay Aquarium with her kids, just to watch other things swimming around. Except these things – the sea otter, the African penguin, the bat ray, the nettle, the blue whale, the white shark, the California sea lion, the giant octopus and many others – were born for swimming. Humans are not.

“Humans and other large primates, like chimpanzees,” she writes, “must be taught. “You evolved from a fish,” Paul Sereno (paleontologist) tells me, but now “you’re an animal trying to swim”. We humans are not born swimmers, but we have found ways to recover abilities that existed before this land-sea split in our evolution hundreds of millions of years ago. years.

Tsui, 44, has enough personal swimming experience to fill the volumes. She likes to think about it, talk about it and, above all, do it. Yet to fully explore her question of why we swim, she embarked on extensive research into human evolution, bodies of water, culture and competition, legend and lore, as she investigated the seduction of water and why we dive.

“I have always been a swimmer. I thought about writing a swimming book for many years,” she says, “but I didn’t know what form it would take. Swimming is a subject, not a book. I wondered what I could do that would be different, interesting. I wanted to create a framework to contain the stories that other people had experienced.

In Tsui’s previous book, “American Chinatown: A people’s history of five quarters” (2009), she profiled important cities in the United States through the stories and perspectives of those who live there, establishing a sense of belonging through their family environment. She saw swimming in a similar context, calling herself a guide in the world of swimming and what attracts us.

“I wanted to fill the book with really good stories,” she said, “much like Christopher MacDougall’s book, ‘Born to Run: A Hidden Tribe, Super Athletes, and the Greatest Race the World Has Never Seen ‘ (2009), which isn’t just about running and people running, it unfolds all these different ideas and creates a great story about indigenous running culture that goes back many years and how it collides to Western ideas of endurance and speed and what a race is.

It is, she says, such a bible for runners.

So Tsui’s book is filled with stories about swimming – some feel good and some heartbreaking – including stories of community and competition, of triumph and tragedy, stories that bind readers in the relationship universal but strange of humans with water.

leaning to the west

Raised in New York City, Bonnie Tsui graduated from Harvard with a degree in English and American Literature and Language. While at university, she studied abroad at the University of Sydney, during which she got a job as a reporter for the Sydney Morning Herald, which gave her professional reporting experience, while allowing you to explore a new place through the eyes of a journalist. Upon her return to New York, she continued to write in what she considered the epicenter of journalism and publishing.

In 2003, Tsui’s husband returned after earning his master’s degree at Oxford University in England, and the couple decided to move to Berkeley, where places close early, the evenings calm down and it doesn’t snow.

Last year, after writing an article about female surfers preparing for a season of Mavericks — the huge and very dangerous waves that crash into Pillar Point, Half Moon Bay — she published “Sarah and the Big Wave”, a children’s book, illustrated by Sophie Diao, about Sarah Gerhardt, one of the first big wave surfers and the first woman to surf Mavericks.

An award-winning journalist, Tsui has written for The New York Times, The Atlantic, The California Sunday Magazine, National Geographic, Outside and other publications.

“Not everyone is a swimmer,” she writes, “but everyone has a swimming story to tell. We are evolving. Why we also swim. Let’s go swimming.”

“Why We Swim” is available through Amazon and Barnes & Noble.