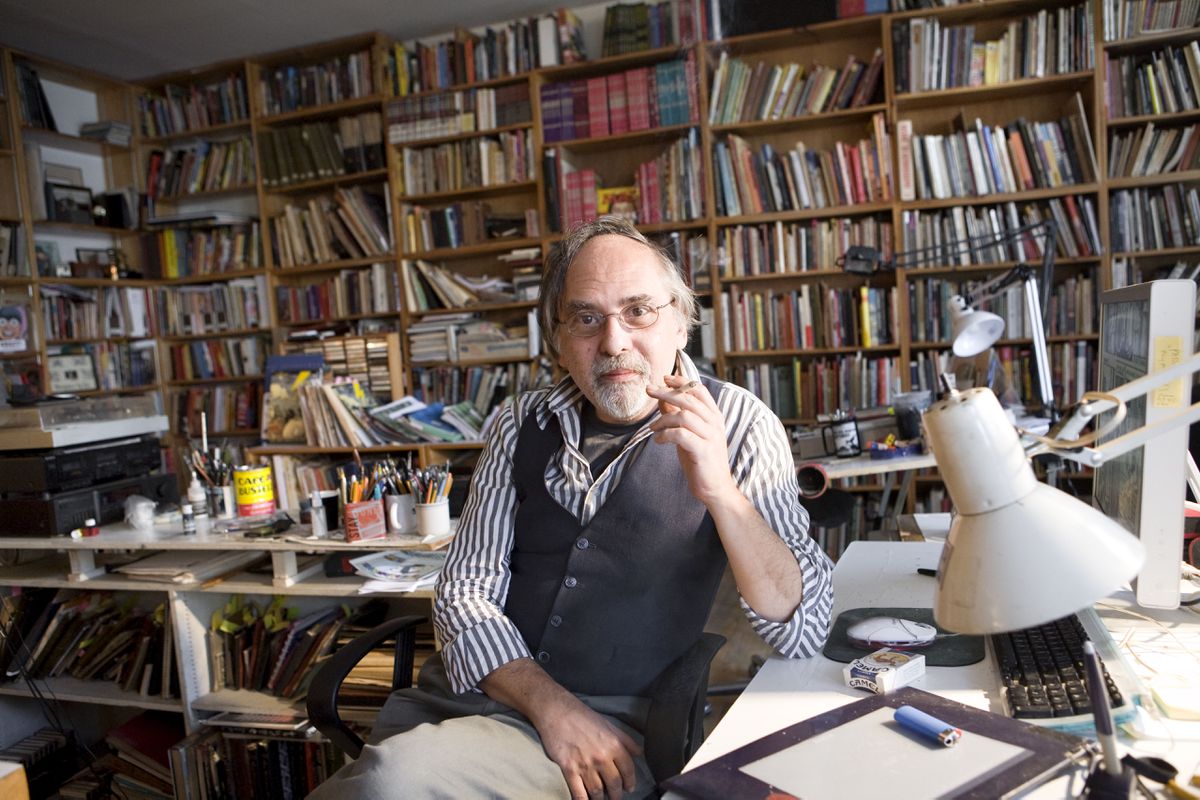 Art Spiegelman, 73, describes himself as a “First Amendment fundamentalist,” referring to freedom of speech and religion. “Just like those religious fundamentalists in Tennessee.” The famous cartoonist talks about the members of a local school board in McMinn County, Tennessee, who recently decided to retire his masterpiece, Maus, the college curriculum. The acclaimed Holocaust graphic novel is based on the recollections of Spiegelman’s father, a survivor of the Auschwitz concentration camp.

The author wondered if the council adopted the decision out of “pure ignorance or simple malice”, as he explains to EL PAÍS via a video call from his home in New York. “But, you know, it’s a free country.”

The school board’s ban was based on eight swear words and a scene of nudity. Spiegelman, who won the Pulitzer Prize in 1992 for Mausbelieves board members were offended by the images rather than the text.

“One was a discussion of my father with a premarital affair. She tries to stop him from leaving, by holding on to his legs. The other was really a photo of my dead mother [also a Holocaust survivor] in the bathtub where she committed suicide by cutting her wrists in the hot water of the bathtub”, he explains, holding an e-cigarette. “And you can sort of see a little dot that represents a nipple and a breast. Only someone who had reached the age of 14 without having seen a dot before was going to be surprised that this happened.

His first thought was that “this is just part of the crazy anti-Semitism that keeps popping up in America. They try to shut down any discussion of these issues, because it’s too disturbing, to avoid conflicts.

This suspicion is shared by renowned Holocaust historian Deborah Lipstadt, who was appointed by US President Joe Biden as Special Envoy for Monitoring and Combating Anti-Semitism. She said “the current rise in anti-Semitism is staggering,” in remarks before the Senate Foreign Relations Committee on Feb. 8.

Spiegelman is aware that the last Holocaust survivors are dying. But he also doesn’t think these school board parents are walking around “with swastikas on their armbands or anything like that.”

“I think it’s part of a cultural trend that exists in many places in America, which takes the Bible at face value. It’s in the same area where they had the Scopes Monkey trials in 1925, just 35 miles from where the school board was, where they were trying to make it illegal to teach Darwin in school because the Bible you says the world is only 3,000 years old. This trial was captured by director Stanley Kramer in his memorable 1960 film Inherit the wind.

America’s romance with banned books has a long history dating back to finn blueberry (1884) and Darwin The origin of the species, banned in 1895 for violating Christian beliefs. These days, a culture war is being waged in classrooms and school districts from Florida to Virginia and Pennsylvania, where books are being pulled from public curricula and libraries because of their anti-racist or LGBTQ+ subject matter – books such as Toni Morrison’s Beloved or that of Alison Bechdel fun house. “They don’t seem to know that banning books never works,” he says. “It arouses interest in reading what is prohibited.”

The cartoonist’s allegiance to freedom of expression also has a strong tradition. He began as a teenager, speaking out for the right of the National Socialist Party of America to demonstrate in Skokie, Illinois, a city then home to the largest concentration of Holocaust survivors after New York. (The Supreme Court ruled in their favor, and the lawyer representing the neo-Nazis was Jewish.) Later, in the 1980s, as a prominent member of the underground comic scene, and ever ready to fend off limits of speech, Mexico has banned its Children’s Garbage Bucket, a humorous version of the popular Cabbage Patch Kids dolls. Much later, he struggled to find an American outlet to publish his 9/11 comics, In the shadow of no tower. And in 2015 he was caught up in a controversy with the British publication The new statesman which he describes as an organ of the well-meaning left, when he pulled a cover he had submitted (titled “Say the Unspeakable”) after the magazine refused to print a comic strip in which Spiegelman reacted to the massacre of Charlie Hebdo, the French satirical publication that controversially portrayed Muhammad. He defended freedom of expression as also “the right to act like an idiot”.

Despite so many precedents, the Tennessee affair took him by surprise. This is why he took the time to study “very carefully” the minutes of the debate at the school board, made public by law, while monitoring the sales of Maus break new records. The trend is global, but particularly intense in the United States, where lately it has been impossible to find a copy. In fact, he has already decided where he will spend this additional income: “I now have more money to commit to voter registration drives and things like that to protect the future of our democracy.” “If you try too hard to protect your children, you make them really vulnerable because there is no way for a child to grow into an ethical and empathetic adult without being exposed to difficulties,” he argues. “One of the most shocking comments was that what is really disturbing is all these mice and hanged children being killed. A member of council speaks about this because I have studied the minutes very carefully And that sounds absurd, like why should our children see that? Well, if it’s about the Holocaust, you have to show what happened. And I tried very diligently to do that. without sensationalising things.

Telling the unspeakable in Maus, first published in Warthe magazine that he and his wife Francoise Mouly published in the 1980s, Spiegelman chose to use animals as characters. The Jews were mice, the Poles were pigs (there were also some French characters who were dogs). He remembers how he got the idea. “And it was just about drawing anthropomorphic characters and I was struggling to find a way to do that that would make sense, until I saw in a film class someone who was really my good friend, a film teacher. So I went to this film class and he was showing racist cartoons. You know, the minstrel kind of stuff. Some humans depicted as monkeys. And then he showed the sound cartoon Steamer Willie [1928], featuring Mickey Mouse. And so after showing these racing cartoons, it shows Mickey Mouse who was not the nice suburban mouse of the 50s and 60s that grew to become an international logo. And then I thought I really had a way in because I was going to do a comic about race in America, with these black mice being oppressed by the Ku Klux Cats.

For a few days he was sure he had a really brilliant idea…until he realized that it would probably be misunderstood or considered racist, or at best, like the product from the damaged mind of a white liberal underground caricaturist. “Then I realized that I could tell the story of my parents and the bloody race of my family using this idea. So I found this universal metaphor for racial oppression. He also found inspiration in George Orwell’s classic anti-authoritarian tale farm animalwhich, according to Spiegelman, is often included in the list of banned books.

Maus gave him problems from the start. When he published it, “there were Jewish organizations very unhappy because the Jews were presented as sweet little mice just hiding, having no resistance. “A lot of people didn’t understand that behind zoomorphism there were people wearing masks. “By the time you read the whole book, it’s clear that Maus is constructed as a self-destructive metaphor. It’s a stupid metaphor. This is Hitler’s metaphor. So I was working with it to demystify.

The first part of the two-part graphic novel opens with a quote from the Führer: “The Jews are undoubtedly a race, but they are not human.” Claude Lanzmann, director of the 1985 documentary film Holocaust, endorsed Spiegelman’s strategy. “Or at least he seemed to like my job,” Spiegelman notes.

The book also ran into trouble in Russia (where it was banned as “Nazi propaganda”) and in Poland, where plans to publish it were halted several times, Spiegelman recalls. It was ultimately Piotr Bikont, journalist for the Polish newspaper Gazeta Wyborcza, who dared to found a publishing house and put it into circulation. As a reward for his audacity, a book burning session was organized for him at the door of the newspaper, and Bikont came out to greet the demonstrators from the balcony behind a pig mask.

Spiegelman is amazed that this sort of thing still happens: Four days after the banning of his comic book made global headlines, a pastor named Greg Locke hosted a book-burning session in Nashville, Tennessee, which included books from Harry Potter and dusk series, described as “satanic”. The event was broadcast on Facebook.

“So they had a big book burning and it was published alongside a photo of a book burning in Germany in 1933. And the only real difference between the two is that one was in color. This person is an idiot, a truly terrible person, not just an idiot, but a malicious idiot who thinks Covid was a hoax, and therefore more people need to die. He also thinks Trump won the election. These people don’t realize it’s ineffective unless you’re willing to go all out after burning the books and burning the writers and readers who are involved in those books.

Sonic 3 movie confirmed by Sega, Knuckles is also getting a spin-off series