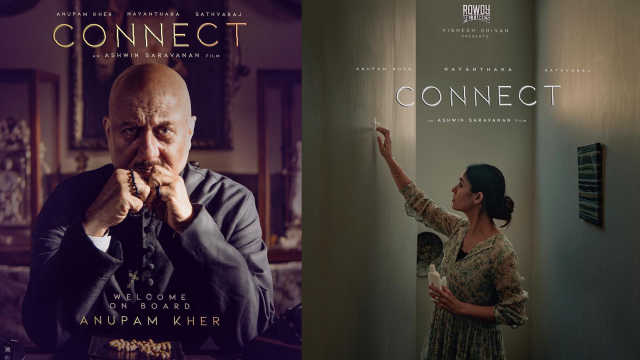 Anupam Kher to star alongside Nayanthara in Tamil movie Connect

Veteran actor Anupam Kher has announced that his 522nd film will be a Tamil project called Connect.

Directed by Ashwin Saravanan, it is a horror film, which also stars Nayanthara and Sathyaraj. The film was produced by Rowdy Pictures banner of Nayanthara.

Kher shared posters of the film on social media on Wednesday, as well as a behind-the-scenes image. He tweeted: “My 522nd movie is a Tamil movie! Thank you very dear Nayanthara, Vignesh Shivan, Ashwin Saravanan and everyone at Rowdy Pictures for your love and appreciation. I loved being a part of the Connect movie and working with such a talented team. See you at the cinema! Jai Ho !! (sic) “

The first poster presents the character of Kher. A glance at his image is enough to realize that he is playing a Catholic priest. The book held before him appears to be the Holy Bible. The old world charm is also quite evident in the photo.

On the other hand, the second poster shows Nayanthara dressed in simple clothes inside a house. She seems to be staring at something on the wall.

Kher has already acted in a few Tamil films. His first such film was VIP (1997), which also starred Prabhu Deva, Abbas and Simran.