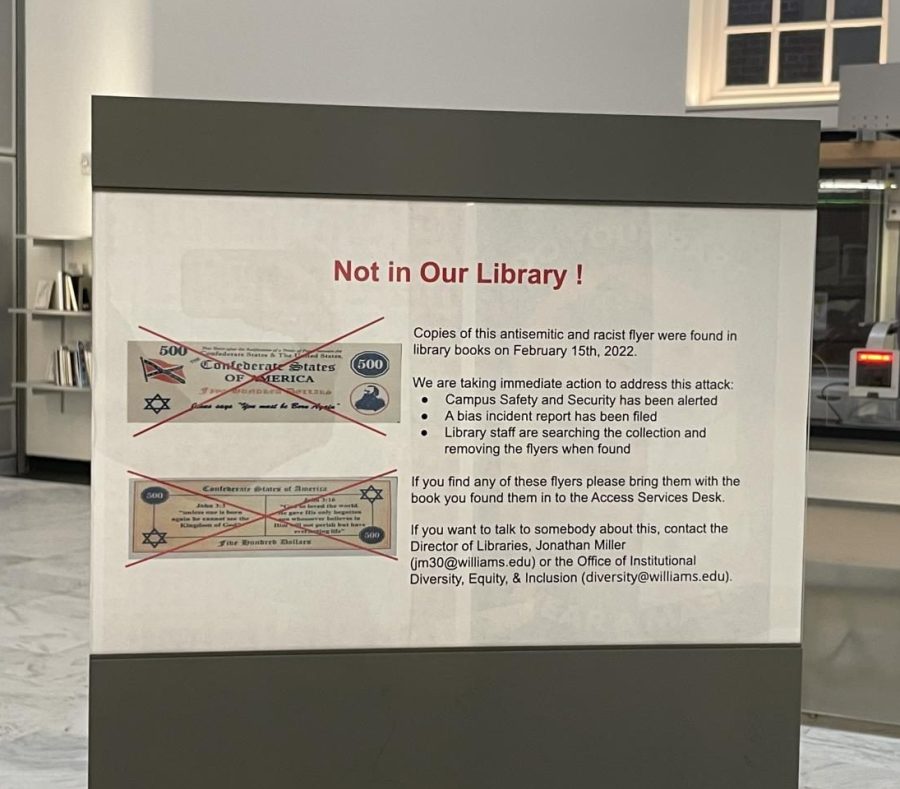 Copies of an anti-Semitic and racist flyer were found in history books at the Sawyer Library on February 15. After consulting with the Libraries leadership team as well as Campus Security Services (CSS) and the Office of Institutional Diversity, Equity and Inclusion (OIDEI), Director of Libraries, Jonathan Miller, posted a sign at the entrance to the Sawyer Library condemning the flyers, which were designed to look like the currency of the Confederate States of America, and asking members of the College community to bring them to the Service Office library access if found.

The flyers feature a Confederate flag, Star of David and a profile of Confederate General Thomas “Stonewall” Jackson on the front and have Bible verses printed on the back. Miller said a library staff member found them between pages of books in the section devoted to German history from 1933 to 1945 – the era of Germany’s Third Reich and the Holocaust.

“They’re not very consistent,” Miller said of the fliers. “Honestly, you kind of have to fit into this world [to understand them].”

The leaflets are similar to those found at Sawyer in the summer of 2018, according to Miller. The College later identified the person who put these flyers in the books as someone unrelated to the College or the greater Williamstown community.

“In 2018, we traveled this area [for the flyers], but we may have missed that shelf area,” he said. Library staff haven’t found any leaflets in any of the shelves that they can confirm have ever been searched in 2018, according to Miller, but if they do, it could serve as evidence of a lingering problem in which more leaflets continue to be placed in the library books. . “It’s possible someone came at some point more recently and put him in there,” Miller said.

Last Tuesday, the same staff member also found two copies of a flyer similar to the ones pictured, which may have been used in an attempt to convert Jews to Christianity, Miller believes. After the staff member returned these flyers, Miller submitted a bias incident report to OIDEI and contacted the CSS.

In fall 2017 and spring 2018, Jewish student Molly Berenbaum ’21 found similar – but not identical – anti-Semitic and racist flyers in Holocaust books she had borrowed from Sawyer. The first time she found one was on September 13, 2017 – her first full week of classes as a freshman. “If it had been later in my college career, when I knew more and was more confident, I would have filed a bias report at the Davis Center and spoken to Rabbi Seth. [Wax, the Jewish Chaplain at the College]”, said Berenbaum. “But at that time, I didn’t really know anyone. I just shot [the books] at the reception and timidly suggested that they go through the [section of] pounds, and I told them the second time that was the second time it had happened and left it at that.

Berenbaum pointed out that these flyers could harm several students of many different identities because they are anti-Semitic and racist. “I don’t think we should lose sight either [harm],” she says.

After the 2018 incident, the Davis Center sent an email to the campus community on July 13, 2018, inviting students, faculty, and staff to a “community space.” [that] afternoon… in response to those hurtful feelings” in the Jenness Conference Room at the Davis Center.

In response to the fliers found in 2018, the College also funded the creation of a zine collection — which is on the third floor of Sawyer — through a Toward Inclusion, Diversity, and Equity (TIDE) grant. “The zine collection is meant as a way to affirm underrepresented identities,” said the zine collection homepage bed.

The sign condemning the flyers placed at Sawyer’s entrance is part of the library’s goal to be more visible in its response to the flyers this time. “[In 2018,] we did not want to increase the harm to people by publicizing [it]but we got to [realize] that while that potential exists, keeping those things quiet can be harmful in and of itself,” Miller said.

Berenbaum said she’s glad the College is taking a more visible approach to responding to the flyers. “Given that there have been multiple instances of these specific flyers being discovered, it seems like a good time they are trying to get ahead of the problem,” she said.

Circulars identical to those found at the College in 2018 were also found in books of the Saratoga Springs Librarynear Skidmore College in September 2017 and at the Calvin Coolidge Library in Castleton University in Castleton, Vermont in 2018.

In 2018, Miller contacted library directors at other colleges and learned that similar flyers had been discovered at Skidmore, Bates College, Whitman College, and Washington and Lee University. “It’s not unique to Williams,” he said. “People who do this want to communicate with people in higher education and they choose this strange way of doing things.”

“Even now, when we’re still wearing masks and stuff — even when it’s not particularly comfortable, people are still reaching for the library,” Miller said. “It’s kind of gross that people want to challenge that with these exclusionary materials. The staff feels the same. They want to delete these [flyers] and they are upset that the building is associated with this [incident].”