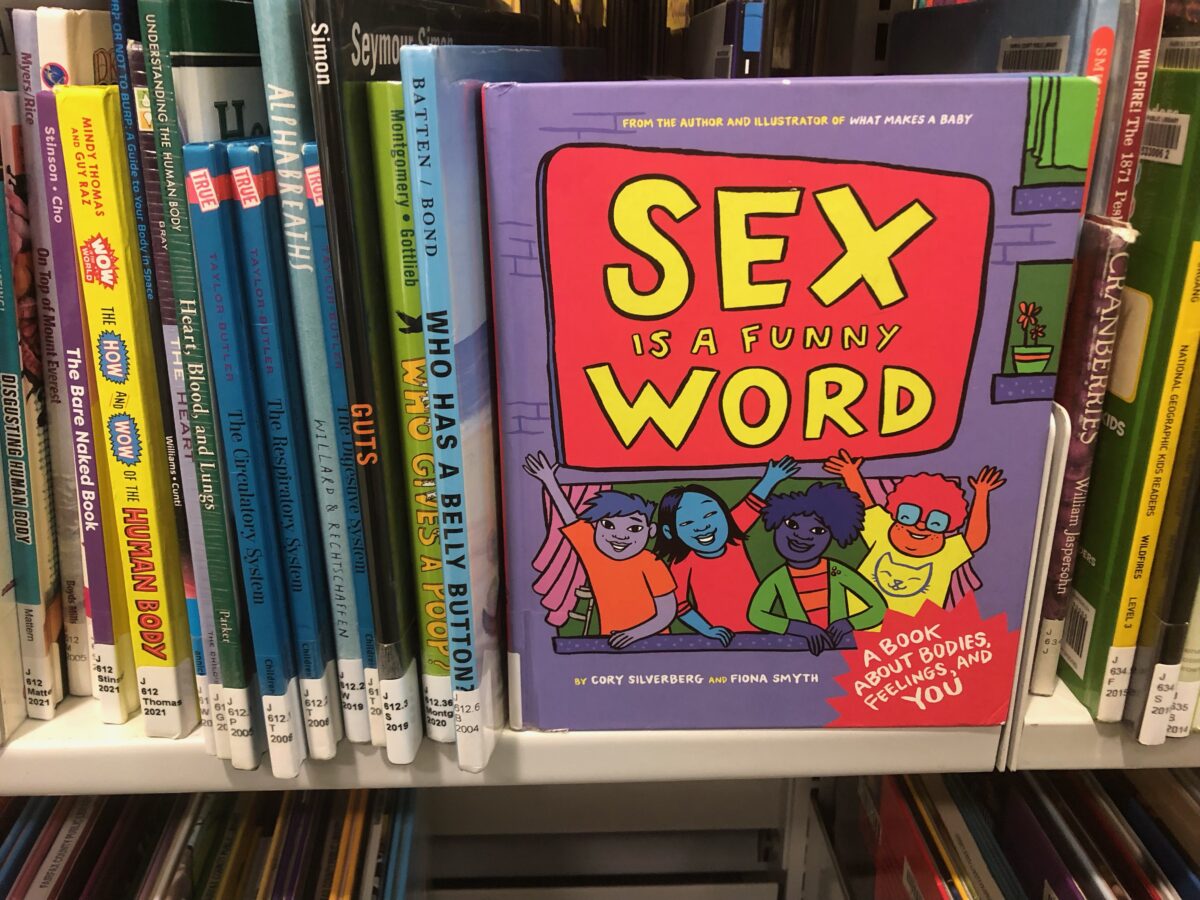 Books with explicit sexual material should prevail over parents’ efforts to remove them from school libraries, according to a website that fights what it calls “censorship” of books.

BookRiot, which describes itself as “North America’s largest independent editorial book site,” offers “How to Fight Bans and Book Challenges: An Anti-Censorship Toolkit.” The guide explains how libraries can combat parental attempts to remove certain books from their shelves.

BookRiot recommends the books as part of its “commitment to diversity, equity and inclusion, and the action steps we’re taking to follow suit.”

Some of the books the organization advocates keeping in libraries include “Gender Queer,” by Maia Kobabe, which features drawings of people having sex; “Not All Boys Are Blue,” by George Johnson, which vividly depicts two male children having sex; and “Out of Darkness”, by Ashley Hope Perez, which includes at least one passage describing a sexual assault against a minor.

Content that parents might find disturbing in these and other books often found in school libraries is detailed in reports on an independent review site called BookLooks. This organization strives to help parents “discover objectionable content that may be in your child’s book before they do.”

Attempts to remove books from school libraries are about “white supremacy,” the BookRiot guide says. “It’s a question of power. Calling it less than that diminishes the Guardians’ responsibility to uphold intellectual freedom and the First Amendment.

Teachers, librarians, and other educators are the “gatekeepers,” explains the BookRiot website.

The BookRiot guide criticizes the media for highlighting parents’ concerns about books they deem too graphic to make available to children. The toolkit suggests using the local news media as a “support tool” to help prevent parents from successfully removing books from school libraries.

It advises citizens, teachers, educators, librarians and administrators to take specific steps to prevent parents from having books removed.

BookRiot’s advice includes asking citizens to “contact local media and local authorities about hate groups when they emerge.” These groups work to target policies they dislike in an effort to maintain white supremacy. Call them out on social media, then follow them with evidence of hateful actions where you can.

He tells educators and librarians to consider scrapping “Ban Book Week” because highlighting books removed from school libraries draws attention to them. Instead, the site advises, they should display the books year-round and celebrate “a week dedicated to protecting the First Amendment.”

In another article on the fight against the “book ban”, BookRiot argues that showing children pictures of people having sex is not a problem.

“Naked bodies and even naked bodies depicted in a consensual relationship on the page (sic) of a middle school or high school book are not child pornography,” the article bed.

Another article argues that according to Supreme Court case law, a work must be pornographic as a whole to qualify as pornography.

“Searching for pages and passages to prove obscenity is not how the law works,” BookRiot advises on its website. “In fact, ‘Gender Queer’ is a great example of how obscenity laws like those in the United States protect freedom of speech and expression. Indeed, gender is discussed and depicted. But c is a fragment (sic) of the story as a whole, constituting no more than two percent of the entire text.

Representatives for BookRiot did not respond by press time to a request for comment.

Minors do not have the same constitutional rights as adults, he said. And under the Constitution, local governments are allowed to to forbid certain types of obscene speech.

“The Supreme Court says you can pass an obscenity law in your city. You can make an order that says, ‘No obscene material in the library,’ Childers said.

“The Supreme Court has never said that school libraries have the right to present obscene materials to a minor, if they turn them into a more substantial work.”

Also, despite BookRiot’s claims, no one is trying to ban the books, Childers said. Conservative activists want to remove pornographic books from public libraries to protect children, he said.

Libraries are unlikely to face legal consequences for having obscene books on their shelves, he added. Most authorities don’t want to prosecute librarians for obscenity.

“So far, none of the law enforcement officials, including conservatives, are keen on using obscenity laws,” Childers said.

On the other hand, parents and activists have been eager to confront libraries. According The figures from the American Library Association (ALA), a record 1,597 books were challenged or removed from libraries in 2021.

“I thought, ‘This is abusive content for kids, especially without parental consent,'” Polk County, Fla. parent Hannah Petersen told The Epoch Times of some of the explicit books found. in the libraries of his school district.

When she learned that some of the books contained graphic depictions of bestiality and child rape, she was shocked.

“I thought there might be some swear words,” she said. “I just didn’t expect it to be what it was.”

A book in Polk County Libraries is “Forever” by Judy Bloom. It includes an extremely graphic sex scene between minors, according to an analysis on BookLooks. It also offers the number of a family planning hotline.

Another book Petersen found in school libraries in his community, “Tricks” by Ellen Hopkins, graphically describes children working in prostitution, according to BookLooks.

After discovering explicit content in school libraries, Petersen and other parents brought criminal allegations to the local sheriff’s office, such as Previously reported by The Epoch Times.

School officials removed the books from libraries and created a committee to re-evaluate them. The committee included two representatives appointed by the parents. The others were school officials, Petersen said.

Only parents attempted to remove books, Petersen said. The others voted to keep the books in school.

“The final decision was that they voted to keep the books in all schools,” Petersen said. “In fact, they even suggested that some of the books be moved to a lower grade and young children have access to them. So we definitely felt defeated.

Petersen said schools should use an “opt-in” system for graphic books, only allowing children with parental permission to view books deemed problematic by some. Currently, parents must request that their children not have access to certain books that they deem objectionable.

According to Polk County spokesman Kyle Kennedy, schools The book review ended with an agreement to create an “opt-out” system, where parents have two opportunities a year to submit a list of books from the library that they don’t want their children to see.

However, this system only prevents children from consulting books, he said. Any child can still read the book inside the library.

“If the child is in the library, he’s not kept behind the desk,” he told The Epoch Times.

The school no longer purchased the discussed books with graphic content, Kennedy said. Also, some of the graphic content books were borrowed and never returned.

One of the worst discoveries of Petersen’s fight was learning that children can pick up books from library shelves and read graphic depictions of child rape.

“It’s so graphic and in-depth,” she said, “that honestly it upset me to think about kids, who may have experienced something like this in real life, reading it. , because it is presented as entertainment.”

Jackson Elliott reports on small town America for The Epoch Times. He learned to write and research the truth at Northwestern University. He believes that the most important actions are small and that, as Dostoyevsky says, everyone is responsible for everyone and everything. When he’s not writing, he enjoys running, reading and spending time with friends. Contact Jackson by emailing [email protected]