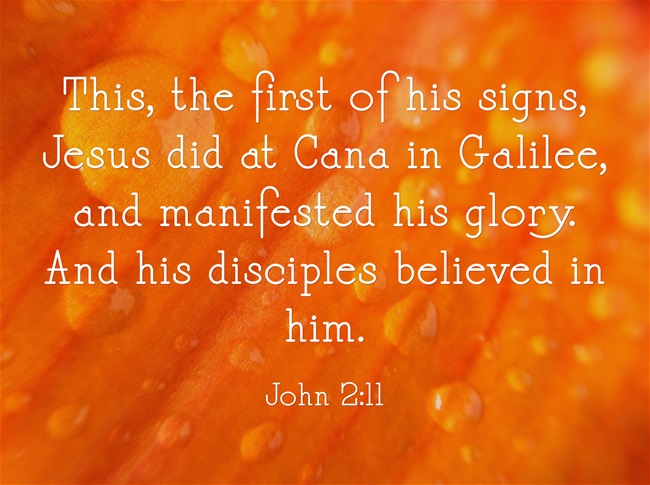 In John chapter 2 we read where Jesus turned water into wine. Here is the story with a commentary summarizing the occasion.

John 2: 1-4 “On the third day, a wedding took place in Cana in Galilee. Jesus’ mother was there, and Jesus and his disciples had also been invited to the wedding. The wine having disappeared, the mother of Jesus said to him: “They have no more wine. Woman, why are you involving me? Jesus answered. “My time has not yet come. “

When Jesus calls his mother a “woman,” it is one of the best ways to show respect for her and for any woman of Jewish culture. Jesus does this throughout the Gospels. It could also be Jesus’ way of distancing himself from her and the motherly relationship into a relationship where he is God since he is about to perform a great miracle. Jesus had to be known to the wedding family or he would never have been invited. When the wedding party ran out of wine, it is interesting that the mother of Jesus comes up to him to tell him that the wine is gone. Why did she tell him that? Jesus was not carrying wine with Him, so why did she even tell him about it? Perhaps it was because she knew that Jesus was both man and God and that he could take care of any problem that arose and most likely she believed that he could miraculously produce wine from water. The least likely scenario was that he could send his followers to buy more wine, but it seems hard to believe. I believe it was Mary’s expectation of Jesus’ miraculous transformation of water into wine, otherwise why would Jesus say “Woman, why are you involving me?” and “My time has not come yet. “What did he mean when he said that his hour had not yet come? It might well mean that it was not yet time for Him to perform miracles and wonders where people would know He had to? come from God Remember that the author of this book (John) concluded his gospel by writing “Jesus did many other signs in the presence of the disciples, which are not written in this book.“(John 20:30) who were”written so that you will believe that Jesus is the Christ, the Son of God, and that by believing you can have life in his name”(John 20:31).

John 2: 5-7 “His mother said to the servants, “Do whatever he tells you. Nearby were six stone water jars, of the type used by Jews for ceremonial washing, each containing twenty to thirty gallons. Jesus said to the servants: “Fill the jars with water”; so they filled them to the brim. “

I like Mary’s statement “Do whatever he tells you. “Shall I do whatever he tells me? What about you? The fact that there are six stone water jars could be analogous to the Jews as they used them for their washing ceremony and the number six in the Bible refers to mankind, the number of men (Rev 13: 8)… to created things. And these were to be filled to the brim, as Jesus instructed. This reflects the abundance that is occurring. found only in Jesus Christ and he is living water (John 4:10, 13-14).

John 5: 8-9a “Then he said to them, “Now take a little and bring it to the master of the feast. They did, and the banquet master tasted the water that had been turned into wine. He did not know where it came from, although the servants who had drawn the water knew. “

John 9b-10 “Then he called the bridegroom aside and said, “Everyone brings out the wine of choice first, then the cheapest wine after the guests have drunk too much; but you kept the best until now. “

The master of the banquet must have thought that the groom was responsible for the wine, because he said that on such occasions they first bring out the best wine, and only after the guests have drunk too much that ‘they bring out the cheapest wine. The point is, after the guests drank a lot of wine, they wouldn’t be able to distinguish between good and bad so easily. In fact, the bridegroom was responsible for the wine … for Jesus is known as the bridegroom and even refers to himself in the scriptures as such (John 3:29; Rev 19: 7-9, 21: 1 -2) and the bridegroom is engaged to His bride, the church (2 Cor 11: 2) and will come and get her one day (soon?). The best has been kept for the end since the Bridegroom can only produce the best.

John 9:11 “What Jesus did here at Cana in Galilee was the first of the signs by which he revealed his glory; and his disciples believed in him. “

This is the first recorded miracle of Jesus and the first proof of His being God was at a marriage and yet one day He will be a participant in another marriage and in this one He will marry the church. This, the first of many signs, revealed his glory and so his disciples believed in him, which speaks again of the purpose of John’s gospel as he concludes his gospel by writing: “Jesus performed many other signs in the presence of his disciples, which are not recorded in this book. But these are written so that you can believe that Jesus is the Messiah, the Son of God, and that by believing you can have life in his name.”(John 20: 30-31).

If you have repented, which means that you have had a time in your life where you turned away and forsaken your sins and then placed your trust in Christ, then you too will be in this great wedding feast in the kingdom. of God. The conclusion will be in your testimony of this: “So I saw a new heaven and a new earth ”, for the first heaven and the first earth had disappeared, and there was no more sea. I saw the Holy City, the New Jerusalem, coming down from the heaven of the part of God, prepared as a beautifully dressed bride for her husband. And I heard a loud voice from the throne say, “Look! God’s dwelling place is now among the people, and he will dwell with them. They will be his people, and God himself will be with them and will be their God. “He will wipe all the tears from their eyes. There will be no more death, no mourning, no crying, no pain, for the old order of things has passed(Rev 21: 1-4).

Jack Wellman is the pastor of Mulvane Brethren Church in Mulvane Kansas. Jack is also the senior editor of What Christians Want To Know whose mission is to equip, encourage and energize Christians and answer questions about the believer’s daily walk with God and the Bible. You can follow Jack on Google Plus or check out his book Blind Chance or Intelligent Design available on Amazon.

5 lessons from the biblical story of Noah

The Jim Gaffigan program: “The History of the Bible”