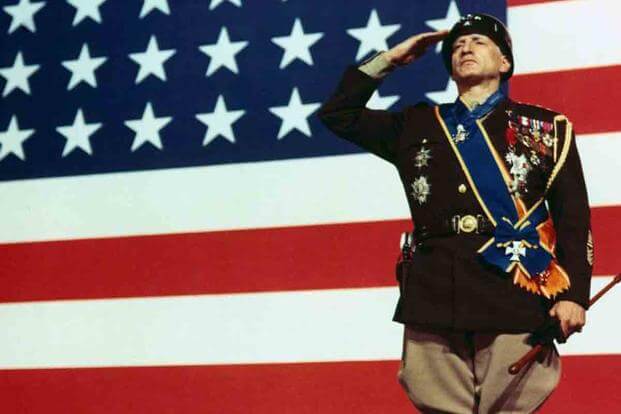 8 Things You Might Not Know About ‘Patton’ – The Movie, Not The General

General George S. Patton may have been one of the most controversial generals to ever command an American army, but the results speak for themselves. He turned a struggling group of Green GIs who lost their first encounter with the Nazis into a fighting force that sent them back to Germany.

“Patton”, the 1970 film, lasted almost 20 years. The Patton family, believing the media contributed to the general’s wartime struggles and eventual death, refused to have anything to do with it. Even upon his release, Patton’s controversial legacy turned out to be alive and well.

The Patton family loved it, and so will you. As you go back and watch (or rewatch), keep in mind these eight cool things about Patton the Man and Patton the Movie.

Portions of “Patton’s” plot were taken from General Omar Bradley’s World War II memoir, “A Soldier’s Story”, and 20th Century Fox hired Bradley to serve as the film’s senior technical advisor. Throughout the film, Karl Malden’s Omar Bradley and George C. Scott’s Patton appear to be close friends. They were not.

Bradley not only knew Patton well, but he knew Patton well enough not to like him, both personally and professionally, according to Patton biographer Carlo d’Este. Perhaps that’s why “Patton” the movie tends to glorify Bradley more than it does itself.

Mostly, anyway. The speech at the start of the film was a re-enactment of the one Patton actually gave to the Third Army multiple times, and all without any notes. No one ever transcribed these speeches because they were too vulgar to be repeated.

In the book “Patton, Montgomery, Rommel: Masters of War”, historian Terry Brighton called this true speech by Patton “the greatest motivational speech of war and perhaps of all time”. But since it was deemed too vulgar for the screen, it had to be edited and toned down for the “old ladies of afternoon tea parties”.

3. There are real war images in the film.

Look closely to catch it, but there’s real war footage shot by US Army combat cameramen throughout the film. Some scenes were shot by future director Sgt. Russ Meyer, who served as a combat cameraman with the 166th Signal Photographic Company, the official photo unit of General Patton’s Third Army.

4. George C. Scott was almost the last choice for Patton.

Burt Lancaster, Robert Mitchum, Lee Marvin, Rod Steiger and even Ronald Reagan all turned down the title role. Most of them later said it was one of the biggest regrets of their careers. No one wanted to cast John Wayne, the only actor who wanted the part.

Director Frank Schaffner not only sparred with a reluctant George C. Scott after seeing his performance in the 1966 film “The Bible: In the Beginning,” he helped bring the alcoholic Scott through production, during his drinking.

5. The cast and crew were filled with WWII veterans.

Scott was in the Marine Corps, despite graduating from boot camp at the end of the war. Both Schaffner and cinematographer Fred Koenekamp were in the Navy. Actors Karl Malden, Lawrence Dobkin and Edward Binns served in the Air Force. A number of other actors served in the United States or United Kingdom armed forces during the war.

Producer Frank McCarthy rose to the rank of brigadier general during World War II and served as aide-de-camp to General George C. Marshall before becoming secretary of the General Staff at the War Department. Being so close to General Marshall, McCarthy had intimate knowledge of how Patton’s behavior was received in Washington.

6. Patton’s family was originally against the film, as was the military.

When the idea for a Patton movie was born in 1951, the general’s wife, Beatrice, didn’t want to consider it. The General died in 1945 (more on that later), but when his widow died in 1953 hopes of a production were rekindled, but Patton’s son, George Patton IV, and daughter, Ruth, campaigned against it. Based on their response, the military agreed not to support her.

Eventually, they both agreed to support the film, but by the time production began, the U.S. military was not using the necessary tanks, planes, and equipment. Fortunately for the producers of the film, the Spanish army of Francisco Franco still used these objects. The film was shot in Spain with real Spanish troops representing the Third Army.

7. Another war movie legend wrote a screenplay for “Patton.”

When the time finally came to prepare a script and begin filming, 20th Century Fox paid columnist Robert S. Allen, a former colonel on Patton’s Third Army staff, to write part of it. . Allen had also written a book on the Third Army. Another author, Calder Willingham, was brought in later.

When none of these efforts paid off, the studio brought in a young writer named Francis Ford Coppola, who knew little about Patton or the Third Army. Coppola mentions in the DVD commentary that he was fired from the production, as his version opens with Patton’s speech, but the final cut uses most of Coppola’s 1966 script. Coppola would go on to do “Apocalypse Now”.

8. George C. Scott made an unofficial sequel to “Patton.”

Historical spoiler alert: Patton was paralyzed after a bizarre car accident where his limo driver hit the wide side of an army truck. He died of a related blood clot a few days later. His wife decided he would like to be buried among his fallen men, where his grave is now: the American Cemetery in Hamm, Luxembourg.

“Patton” does not end with the General’s death. Scott would reprise his role as the famous general in a 1986 made-for-TV movie, “The Last Days of Patton.” This film picks up where “Patton” left off, with the general relieved of command for using former Nazis in his post-war administration.

— Blake Stilwell can be reached at [email protected] It can also be found on Twitter @blakestilwell or on Facebook.

Whether you’re considering joining the military, seeking a post-military career, or keeping up to date with military life and benefits, Military.com has you covered. Subscribe to Military.com to receive military news, updates and resources straight to your inbox.

© Copyright 2022 Military.com. All rights reserved. This material may not be published, broadcast, rewritten or redistributed.