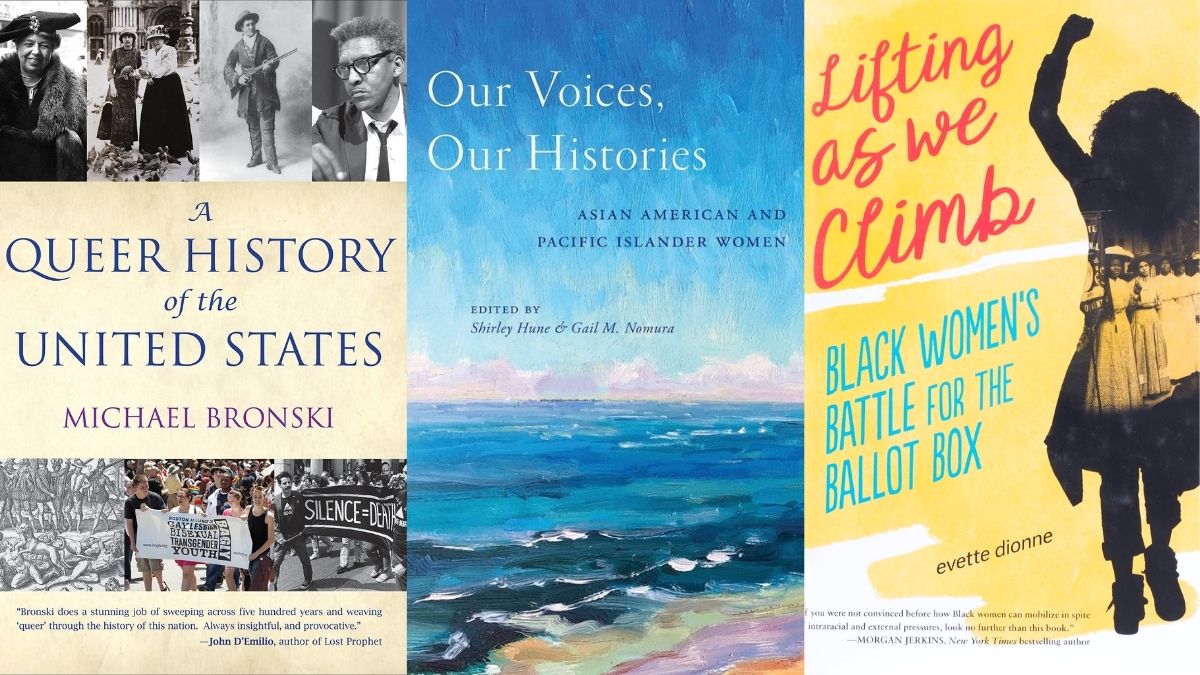 7+ books about the complex experiences of women in US history

During celebratory months based on history and culture like Women’s History Month, we are used to championing the accomplishments and experiences of the individual (often in a singular moment) instead of the collective action of the group for decades. I like to learn and share about a hidden figure or an under-mediatized person as much as another. Yet by choosing to highlight these moments so disproportionately, we leave behind all the people who come after and before them. Furthermore, this attitude coincides with the same deeply misguided individual narrative of “bootstraps” put on “mainstream” American history (generally dealing with white males, that is).

So while I’ll end up sharing a biography or memoir (I love a good memoir), this time I wanted to share seven (or more) female-centric American history books! Some of these books focus on a group of women as a whole, and others focus on how women navigated a time. All of these focus primarily on pre-70s American history (although most skip that at the end), otherwise this list would never end.

In A history of black women in the United States, Two historians telling the story of the United States from before 1619 to 2000 through the lives and perspectives of black women – before 1619 because of the first black woman who traveled from New Spain (Mexico) to a place that was going become New Mexico in the United States, Isabel de Olvera. They also address this issue of individualism at the expense of a singular narrative in the book. At the start of each chapter, the section begins with the story of a black woman, then expands to the conditions of other women in similar circumstances and provides historical context. The authors invite readers to reflect on the privileges that allow the story of the initial chapter to live on today.

So far, this ReVisioning History series has only published one book specifically about women, so I’m patiently waiting for the next one!

They were his propertythere: White Women Slave Owners in the American South by Stephanie E. Jones-Rogers

I don’t remember how I met They were his propertybut I remember finding it after reading A history of black women in the United States. Jones-Rogers’ book shows readers not only that white women were cruel to black women for more reasons than insecurity, but that they also participated in the more cruel aspects like torture and the slave market in men’s sides. It forces readers to face the reality of how the slavery of black women served white women. The book doesn’t just say that this treatment was wrong, because we already know that. Instead, it reminds us that the limited economic mobility and social power of free women has come at the expense of other women.

From Eve to Evolution: Darwin, Science, and Women’s Rights in Golden Age America by Kimberly A. Hamlin

From biblical texts to Darwin’s theories, American society has always sought guidance (and excuses) on what the role of women should be in the country. Often this came in the form of ideas and interpretations of men. However, women at every turn had differing opinions about this place. Kimberly A. Hamlin’s From Eve to Evolution examines how women (especially first-wave Darwinist feminists) interpreted Darwin’s theory and the science that followed it during the Glorious Age (ca. 1870–1900). Science and feminism don’t always go together very well, as many of these women have opposed (or outright defended) eugenics. However, the book still provides insights overlooked by women during rapid scientific development.

Similar to A history of black women in the United States, Our Voices, Our Stories: Asian American and Pacific Islander Women takes a collection of stories to weave together a larger story. However, in this case, it serves as an anthology for 35 Asian American and Pacific Islander (AAPI) women to write the story of their individual culture, from language politics to the role of food and family (adopted and generational stories). In addition to these author-curated stories, each chapter introduces readers to a new AAPI author.

A queer history of the United States by Michael Bronsky

A queer history of the United States examines how gender and ever-changing concepts of femininity and masculinity are shaping American culture. Author Michael Bronski was a little too light on pre-colonial times, in my opinion, but the book still provides excellent detail on life and the laws governing gender and then family. Besides the final chapters, which revisit a very timely thesis, one of my favorite sections presents the changing gender expectations during and after industrialization. For the first time, so many single people (in the United States) lived outside their parents’ roofs for work, and “boys” and “girls” clubs (including housing situations) sprang up to ensuring that “morality” was always in check.

Like the other titles in this series, Bronski was written for the general public. However, if you want an even friendlier version, check out A queer history of the United States for young people.

Public Vows: A History of Marriage and the Nation by Nancy F. Cott

Talking about the choices of married and single women, this next book presents all the ways the government (historically and currently) influences people’s marriage. If you think about it for more than a second, government policymaking influences how, when and if marriage is recognized, not just as a formal union, but in terms of income tax and welfare programs. social safety net.

Cott published it in 2002, but many marriage issues have changed since then, such as federally recognized same-sex marriage and hyper-awareness of how marriage plays out in the immigration system. Since the early days of COVID-19, people with disabilities have warned that this pandemic will affect shared healthcare and family dynamics. Many people with disabilities who wish to marry long-term partners do not do so because it will limit their access to life-and-death care. You can read some of their stories via #WishesAgainPromised.

Lifting as We Climb: Black women’s battle for the ballot box by Evette Dionne

Written by Evette Dionne, then editor-in-chief of Bitch Media, Lift as we climb follows the story of suffrage for all women through black women’s advocacy. The story begins before the end of slavery as abolitionist white women feared for the right to vote after black men and ends by examining women’s work through the civil rights legislation of the 1960s. Dionne writes this so that the young activist still in high school can learn more about this story, but it is still complete. Additionally, the book connects the role of all black women, regardless of class, and the efforts of women today to make voting accessible.

Despite the millions of Native, AAPI, and Latino women (and others not considered “white” at one time) who have and continue to be part of American history, there are significant gaps in recent books. detailing their history. Often women’s experiences get a chapter in certain books where individuals are mentioned rather than larger movements and stories. This gap exists in “regular” consumer history books, but titles bridging this gap are abundant in academia. When putting together this list, I sought to focus on accessibility, which means I limited the inclusion of such titles. However, with so many shortcomings, I wanted to include them here in a separate section.

Read something we missed? Let’s share more books in the comments below.

—The Mary Sue has a strict commenting policy that prohibits, but is not limited to, personal insults towards anybodyhate speech and trolling.—

Do you have a tip we should know? [email protected]

‘The Batman’ Fans Guess Which Movie Wayne Family Saw in 2001