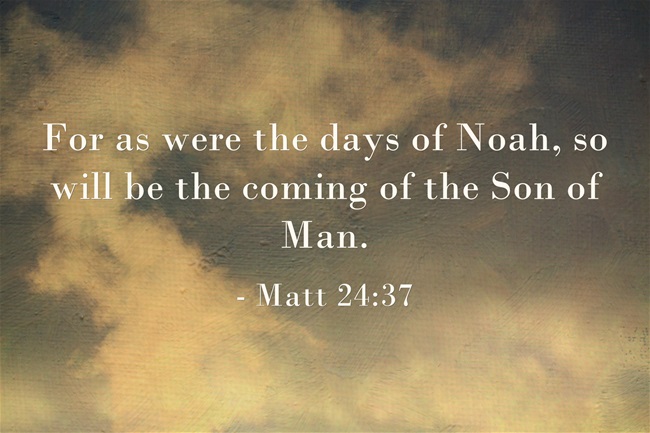 5 lessons from the biblical story of Noah

Here are 5 lessons I learned from Noah’s account in the book of Genesis.

Seal the Ark and the Atonement

When Noah built the ark he had to make it waterproof of course and what did he use? He used a special tar-like substance called pitch. This pitch was a very powerful water repellent. God asked Noah to “Make yourself an ark of gopher wood.” Make chambers in the ark, and cover it with pitch inside and outside ”(Gn 6,14). The interesting thing about the word used for pitch is that the Hebrew for pitch is “kopher” and it means “price of a life, ransom” and “a blanket”. It was a symbolic image of the atonement provided by Jesus paying with his own life to save those who would believe in him. Just as Noah and his family had to voluntarily enter the ark, those who trust in Christ must come to him and believe. Noah and his family were literally saved from the flood of judgment of God by this pitch (atonement) just as believers today must place themselves under the atoning blood of Christ to escape the wrath of God. The family had to be in the ark to be saved and those who are “in Christ” will also be saved (2 Cor 5:17).

When Noah and his family entered the ark there was a problem because apparently there was no way to close it since it opened out so Noah and his family entered the ark. ‘ark and in Genesis 7: 16b it says “And the LORD shut him up in.” The word for closed or, as most translations say, “to close” is the Hebrew word “cagar” and means “to shut up” or “to be closely related,” so that the thought comes to mind that salvation is fully a work of God and a free gift given completely by God (Eph 2: 8-9). We did nothing to save ourselves, nor could Noah close the door of the ark. The hand of God was involved in both circumstances. God is the one who calls (Eph 1), draws (John 6:44) and adds to the church (Acts 2:47). The only thing we contribute is that we must repent and believe the gospel (Mark 1:15).

The floods of judgment

The sea has long symbolized the death and judgment of the Jewish people who wrote the Bible. Drowning rains fell from heaven during the great flood of Noah’s day, just as God will rain His judgment from heaven on all who refuse to believe. Jesus compared the days just before his coming to the days of Noah (Mt 24:37). On the one hand, no one expected a torrential flood to come down from heaven and today few people expect God’s coming judgment in Christ to come down from heaven. Just as then people will mock the idea of ​​the coming of the Son of God, saying, “Where is the promise of his coming?” For since the fathers fell asleep, all things have continued as they were from the beginning of creation ”(2 Pet 3: 4). Even now, the wrath of God is “kept until the day of judgment and the destruction of the wicked” (2 Pet 3: 7) and “the day of the Lord will come as a thief” (2 Pet 3:10) as hardly anyone is expecting it. Christians are the few who know of this future wrath of God.

God is so much more patient than we can even imagine. Noah surely gave a warning to those who were wicked on earth even though it was because he was known to be a righteous man. They had a long time to listen to Noah because of the time it took to build the ark but apparently no one believed him. We should also note Noah’s faithfulness during this process. The place where the ark was built was a semi-arid place and the last thing you might have expected was a flood that blanketed the earth and drowned everyone except Noah and his family. Peter writes: “The Lord is not long in fulfilling his promise, as some expect slowness, but he is patient with you, not wishing that any should perish, but that all should come to repentance” (2 Pet 3: 9).

The word in Hebrew is the same which is transliterated and appears as the same word as gopher in most translations. We don’t know exactly what kind of wood it was; some think it was cypress. The word “gopher word” is translated from the Septuagint as “squared timber” so that may be all the Bible tells us. It is not so much the type of wood that was used but the fact that the wood was used because the wood is symbolic of the wooden cross. The timber carried Noah and his family safely over the waters, which, again, symbolizes God’s judgment. No one believed Noah’s warnings and today God speaks to unbelievers through his word and gives a warning that anyone who does not believe in the Son of God has the wrath of God abiding upon him (John 3: 36b). An interesting parallel is that the cross was cut into square pieces and the two pieces were placed on top of each other to form a cross shape.

If you are not yet born again, let me warn you that there is another flood to come. It’s the flood of God’s judgment and one day (soon?) The floodgates will collapse on unrepentant sinners. Today the wrath of God is held back by the barrage of his patience and mercy, but one day it will erupt and drown everything in its wake. the ark being the wooden cross and the pitch being the atonement. A day will come when it will be too late (2 Cor 6: 2).

Jack Wellman is the pastor of Mulvane Brethren Church in Mulvane Kansas. Jack is also the senior editor of What Christians Want To Know whose mission is to equip, encourage and energize Christians and answer questions about the believer’s daily walk with God and the Bible. You can follow Jack on Google Plus or check out his book Blind Chance or Intelligent Design available on Amazon.

Why Hollywood’s New Biblical Story Got So Much More Colorful