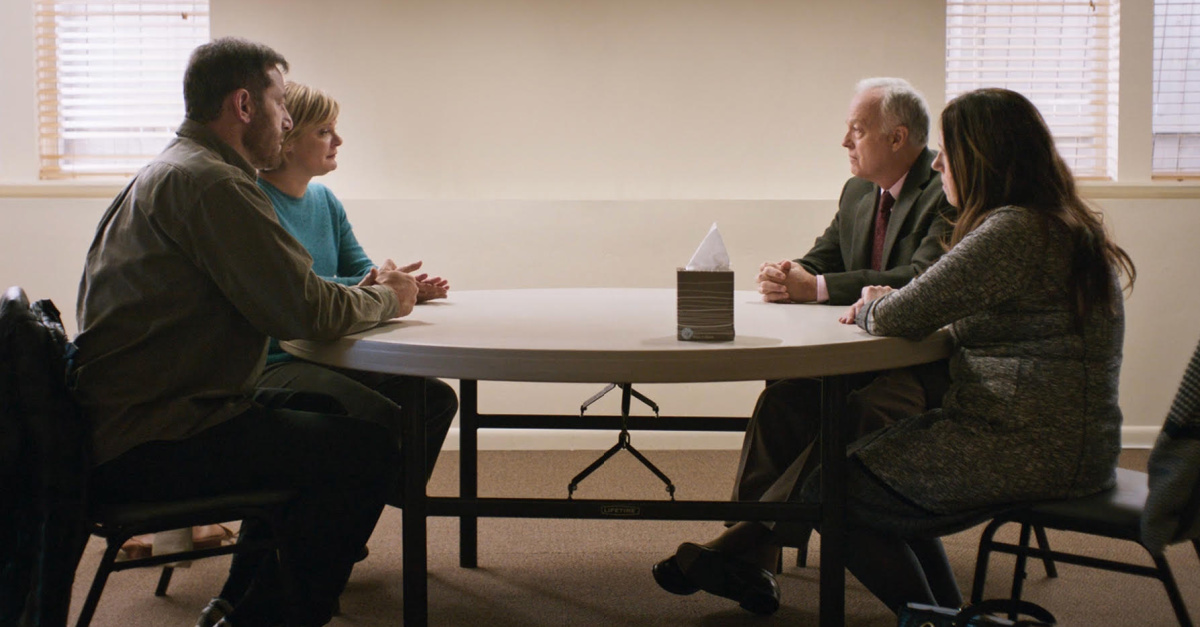 4 things to know about Mass, the powerful movie about forgiveness in the midst of tragedy

Jay and Gail are a grieving middle-aged couple searching for answers – about the past, present and future.

Their search for answers began when their teenage son was killed by another teenager in a mass shooting that made national headlines. They want to know: why did this happen? Could it have been avoided? What did the other family know?

They studied the story of the killer. They went to court. They saw a therapist.

Yet, they are filled with emotional pain that follows them wherever they go.

And now they’re scheduled for a one-on-one conversation with the parents they hate – the parents who raised the boy who ended their son’s life.

The unscripted conversation will take place in a church room without anyone else present. No lawyers. No advisers. Just a table and four chairs.

The meeting will be difficult, yes. But will it lead to the answers and healing they desperately need?

The new cinema Mass (PG-13) tells the captivating story of this emotional encounter.

Here are four things you need to know about the movie:

Mass is not a Christian film – at least not in the traditional sense. It involves heart-wrenching mature themes (“I raised a murderer,” one of the moms says). It includes PG-13 content that rarely makes it denominational movies (details below). Writer and director Fran Kranz told Crosswalk that he does not consider himself religious, although he has been raised in the Catholic religion and feels “at home in the church”.

Despite these caveats, Mass is one of the best movies – let alone the best faith-centric movies – you’ll ever see. The subjects – healing and forgiveness – form the heart of Scripture. The setting of the film – a quiet church hall adorned with a prominent wooden cross – only adds to the spiritual direction of the film. A cheerful church worker showeres the couple with love and kindness, but then goes to a separate part of the building so that they can be alone to talk.

The final 10 minutes of the film include a gospel-centric moment that is as powerful as any scene from a movie I have experienced.

He took inspiration from the words of South African Bishop Desmond Tutu, whom he quoted as saying: “Forgiveness, reconciliation and reparation are not the normal motto of political discourse. … They are much more at ease in a religious domain.

Mass succeeds despite what it is: a film that takes place largely in one room. It opens with a scene showing one of the couples driving to church and ends with a scene showing the two couples leaving. Caught between those bookends is a good hour of heartwarming, heart-wrenching discussion that’s a painful balm for the soul.

The two couples do not leave the room until they find a solution. Tension fills the air. No punches are thrown, but the anger is palpable.

The quartet of actors – Jason Isaacs, Martha Plimpton, Reed Birney and Ann Dowd – is excellent. It is a film carried not only by the dialogue, but by the inflection of the voice and the facial expressions up close.

“I think what these people are doing is so amazing – sitting in a room or sitting in front of a table with people that they disagree with, disagree with or in this case… hate,” said said Kranz. “[And they] work through that. “

Kranz hopes the film can inspire today’s world – leaders and ordinary citizens – to sit down and speak civilly with those they disagree with.

“It’s something that should be celebrated and seen more,” he said.

The plot of Mass involves a mass shooting, although the questions it raises can apply to most of the tragedies in our lives: Why did this happen? Could we have stopped him? How do we move forward? Some are responsible. Most are not.

The couples celebrate the happy memories of their boys’ lives – sharing old photos and funny stories – although they each know the pain is imminent.

“I know the world would have been a better place without him. I can’t say I would have done it,” the gunman’s mother said.

They want to visit the past and erase everything that happened that day… but they can’t. So, they go ahead, in search of peace.

The film urges the viewer to take the topic of mental health seriously, even though it recognizes that there are no easy solutions. (The shooter had seen a therapist.)

“I hope that the experience of watching the film will give [moviegoers] permission to feel what they feel [and] so you can have a conversation, ”Dowd told Crosswalk.

The best Hollywood movies give us storylines with an unsolvable problem – then solve it. Mass is it that.

Jay and Gail, the grieving couple for the murdered boy, beat around the bush with a conversation about traffic and weather before finally demanding answers.

“Why do I want to know about your son?” Because he killed mine, ”Gail says.

“He destroyed your lives – all of our lives,” Jay says.

Jay’s goal is to see the parents of the teenage murderer punished. Deep down, however, he knows it won’t cure the pain. It won’t bring her son back either.

“I can’t live like this anymore,” she said, crying.

Both seek a purpose in the death of their son. Both are looking for answers. Jay and Gail want to forgive. They want to enjoy life again. They just don’t know how to do it.

Forgiveness and reconciliation in Mass is not clean and tidy. Words of anger are exchanged. The tears flow. Hearts, however, are at least partially mended – even as the couples walk out of church with many miles remaining on their healing journey.

Forgiveness and reconciliation in Mass is biblical… and real. Towards the end of the film, we hear the anthem Blessed be the tie that binds, sung by a church choir who practices in another part of the building. The words echo through the walls, offering hope: “Before our Father’s throne,” the choir sings, “we pour out our ardent prayers – our fears, our hopes, our goals are one, our comforts and our cares. .

Jay, who was leaving, stops short to listen. Her face lights up. The hope he desperately needed has been found.

Entertainment Rating: 5 out of 5 stars

Note suitable for families: 3 out of 5 stars

Michael Foust has covered the intersection of faith and current affairs for 20 years. His stories have been published in Baptist Press, Christianity today, The Christian Post, the Sheet-Chronicle, the Toronto Star and the Knoxville News-Sentinel.

Williams’ role in One Hour Movie is much more unsettling than his usual and more adorable roles.

The trailer for the new Scream movie has dropped